Are people incidentally exposed to news on social media? A comparative analysis 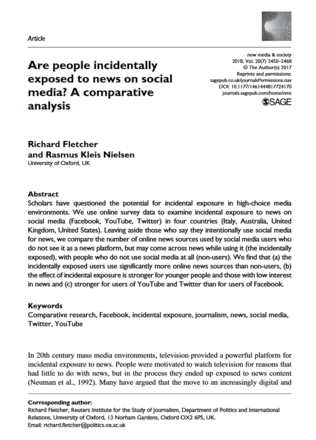 - The incidentally exposed users use significantly more online news sources than non-users. Because the average number of news sources used in each country is low, the researchers suggest that any increase in number of sources would necessarily mean an increase in diversity. Providing that the given content is not identical, even adding one more similar source to those consuming news from just one source would constitute an increase in diversity of views. On the other hand, for those who consume news from an above-average number of sources, incidental exposure via social media may indeed result in an echo-chamber effect if all additional sources are highly similar to what is already being used.

- The effect of incidental exposure is stronger for younger people and for those with low interest in news. It follows that incidental exposure to news via social media could potentially reduce knowledge gaps that result from self-selection away from news, especcially in social contexts where information opportunities are scarce. This could also be the case in environments formerly characterised by incidental exposure when media choice was relatively low. The paper suggests that this could lead to outcomes such as civic engagement and political participation.