Authoritarian Practices in the Digital Age

This paper is the introduction to a Special Section that systematically examines authoritarian practices in relation to digital technologies in multilateral, transnational, and public–private settings. It explains the research agenda and aim of the collection and briefly describes its contributions 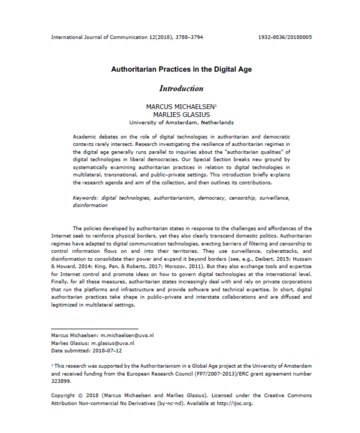 This digest has been produced in cooperation with the students of the University of Trento, within the seminars "Come diventare un analista politico: ricerca, informazione, e divulgazione sulle politiche europee".

The research, comprising seven contributions, aims to advance knowledge on what constitutes an authoritarian practice in the field of digital communication technologies and how these practices, in turn, may change the way the technologies are used and developed in an increasingly interconnected world.

The study combines insights from China, Russia and Central Asia, Iran, Pakistan, sub-Saharan Africa, and Western Europe with expertise in Internet control and surveillance, governance, and legislation. The contributions also give empirical flesh to the idea of authoritarian and illiberal practices as they are diffused between states, coproduced by states and corporate actors, and experienced by citizens.

The contributions address two central questions: What configurations of political actors give rise to digital authoritarian practices? and How are these practices produced and diffused, negotiated, and legitimized?

The study introduces the twin concepts of digital illiberal and authoritarian practices. The first one infringes on the autonomy and dignity of the person and is a human rights problem, while the authoritarian practices sabotage accountability and thereby threaten democratic processes. The contributions included in the research argue that the threats citizens may be exposed to in a digitally networked world can be grouped into three categories: arbitrary surveillance, secrecy and disinformation, and violation of freedom of expression.

The study uses the example of the U.S. National Security Agency’s massive data-gathering program to illustrate both what constitutes a practice and the distinctions as well as the connections between illiberal and authoritarian practices in the digital sphere. According to study, the idea of “practices” allows to go beyond structural regime type classifications to examine what political actors actually do in the digital realm that may be a threat to citizens. As an analytical tool, the concept illuminates how such practices are produced in configurations of authoritarian and democratic as well as state, interstate, and nonstate actors.

The first three contributions focus on international diffusion of technical and political tools for authoritarian Internet control, while the fourth and fifth articles analyze public–private relations and authoritarian practices. The last two articles focus on authoritarian and illiberal practices in formally democratic settings.