According to an article published on “Digital Journalism”, people that use search engines for online news use more diverse and more balanced sources. 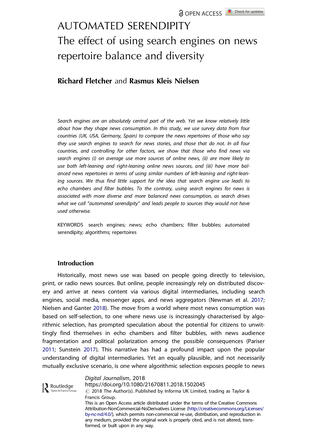 Authors used 2017 Reuters Institute Digital News Report data from United Kingdom, Germany, Spain, and United States to compare the individual news repertoires of people that use search engines like Google and Bing to search for online news and those who do not, a topic that few studies have investigated. They first compared the number of online news sources used by the two groups. Then, to address concerns over echo chambers and filter bubbles, they looked at the diversity of the repertoires, by analysing the proportion of people that consume both left-leaning and right-leaning news sources, and the balance (ratio) between those two kind of sources.

They found, confirming their original hypotheses, that in every country, those who use search engines to search for news use more online news sources than those who do not. In the first group there is also an higher proportion of people that use both left-leaning and right-leaning news sources. Contrary to expectations, they also found that in every country those who search engines for news have a higher ratio of left to right-leaning sources, so on average they have more balanced news repertoires. They call this phenomenon “Automated Serendipity”. The study concludes that there is little evidence that search engines favour echo chambers and filter bubbles in news consumption.