Better off without You? How the British Media Portrayed EU Citizens in Brexit News

A study published on The International Journal of Press/Politics found that EU citizens were generally not portrayed negatively in Brexit news, except in regional newspapers of England and Wales. It also suggests that news media presented the referendum as a vote against migrations in general and not about intra-EU migrations 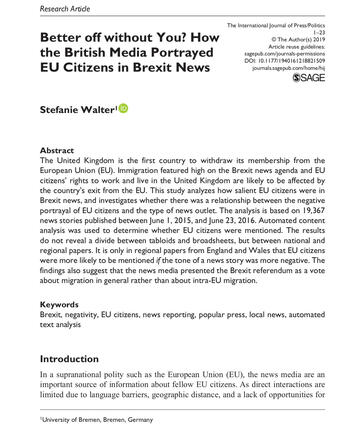 This research article explores how salient EU citizens were in British news coverage of Brexit and how they were portrayed, a topic that has been largely overlooked by literature.

Through LexisNexis and other databases, Walter collected 19,367 news stories related to Brexit published by broadsheets, tabloids, and regional papers between June 1, 2015 (after the general elections won by the Conservatives, which had promised to hold a EU referendum) and June 23, 2016 (the date of the referendum). Then, she extracted articles also mentioning EU citizens, finding 2,249 (12% of the Brexit stories). Distribution looked overall similar.

The author did a robustness check to verify if the analysis was able to differentiate between citizens from other EU countries and non-EU migrants. This showed that “while EU citizens were less likely to be mentioned in news stories with a more negative tone, migrants in general were more likely to be mentioned in such stories. This finding suggests that the referendum may have been perceived as a vote against migration in general rather than against intra-EU migration”. Since Brexit would affect EU citizens migration and not general migration levels, this raises doubts on whether the media helped citizens make an informed choice.