Challenges to Media Freedom: A view from Europe

Drawing on the findings of two projects awarded by the European Commission, the paper examines the sources of the threats hindering media freedom in Europe 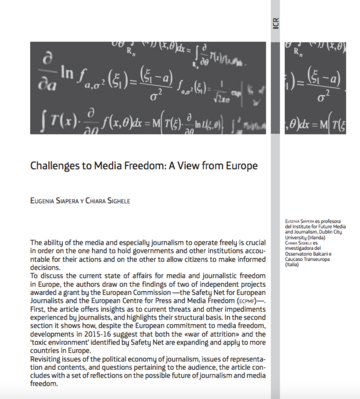 Is Europe a place where journalists can practice their profession free from external influences? Although freedom of expression and media pluralism are enshrined in Article 11 of the EU Charter of Fundamental Rights, a toxic environment is expanding according to the authors of this paper. Chiara Sighele and Eugenia Siapera draw on the findings of two independent projects awarded a grant by the European Commission —the Safety Net for European Journalists and the European Centre for Press and Media Freedom (ECPMF) . The Safety Net for European Journalists was a project carried out between 2014 and 2015 to develop a set of resources and tools for journalists in 11 countries (Bulgaria, Croatia, Cyprus, Greece, Italy, Macedonia, Montenegro, Romania, Serbia, Slovenia, and Turkey) that would enhance their safety and allow them to carry out their profession. 110 in-depth interviews identified the sources of threats that undermine the journalistic profession:

Rather than direct attacks, the sample interviewed experienced an ‘undercurrent of low grade but constant pressure’. This ‘war of attrition’ has been made possible by:

The abuse of legal actions for defamation is particularly worrying, as it is a criminal offense in 22 out of 28 EU countries. However, the EU has no direct power to intervene on member states’ national regulations over this matter. The authors suggest that “the introduction of an annual monitoring mechanism to assess each Member State’s performance in respecting fundamental rights and values, including those on freedom of expression and information, would be a key first step to strengthen their enforcement at EU level”. Final recommendations also include: