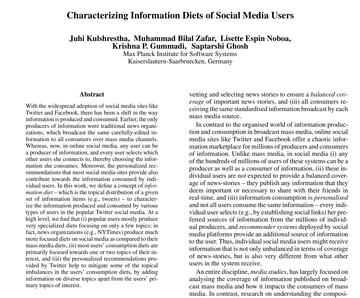 With mass media communications, each consumer receives the same standardised information broadcast by each source, and there is a limited number of sources. With social media, each consumer is also a producer of information, and the composition of the information to which one is exposed is personalised.

The authors extracted "keywords" (hashtags and URLs) from tweets. They used those keywords to infer the topics of the tweets. To do that, they relied on the assumption that if many users interested in a certain topic are discussing a particular keyword, that keyword is most likely related to that topic. For this study, they used 18 topical categories: arts-crafts, automotive, business-finance, career, education-books, entertainment, environment, fashion-style, food-drink, health-fitness, hobbies, paranormal, politics-law, religion, science, society, sports, and technology.

The three news organisations that the authors examined (The New York Times, The Washington Post, and The Economist) had multiple accounts on Twitter: one primary account and several topic-specific accounts. The study considered the primary account, which invariably has a bigger number of followers than the others.

The authors than selected a random sample of popular/influential accounts, to study their information diet. They identified a top topic for each user. They found that popular users, on average, post a significant fraction of their diet (between 20% and 50%) on just their top topic.

They looked at the distribution of the 500 randomly selected verified users across their top topics: most users have their top topic as one of three topics, namely entertainment, sports, and politics, but there are small fractions of popular users focusing their diets on all the other topics as well.

The authors then selected a random sample of Twitter users, and studied the tweets that they received from their followers. They found out that users in social media consume a much larger fraction of their information diet on their primary topic or topics of interest, as compared to what they would consume from a typical mass media source. This comes at the cost of the other topics.

Twitter and other social media deploy recommendation systems to enable users discover content that would be interesting to them. Recommendations do not always match their consumed diet, so they tend to even out the imbalances in the consumed diets of the users.