Churnalism on the Rise? Assessing Convergence Effects on Editorial Practices

Newrooms' excessive reliance on pre-packaged sources of news lowers the quality of information and threatens media pluralism, but it has become a mainstream practice - at least in the case of Greece 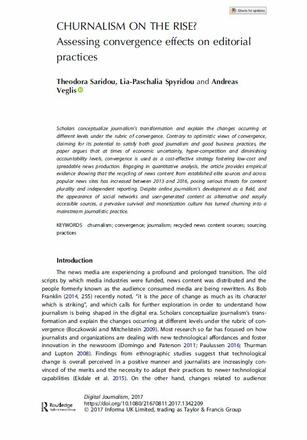 The term “churnalism” indicates the habit of recycling news content from popular sources and across news sites, with journalists making little or no critical assessment of it, and not providing additional value. Newsroom convergence lowers the costs for publishers, but it can end up providing readers with low-quality information, as well as threatening media pluralism. It the light of the growth of this phenomenon, Journalism devoted a special issue to it.

Adopting a quantitative approach and focusing on the case of Greece, the article finds that the practice of churnalism is mainstream in the country. The study took into consideration 100 articles drawn from the politics section of the 10 most popular news websites in Greece, visited in autumn 2016. Only 9 percent of the stories were found to be original.

Newsroom convergence poses risks for pluralism because of the extensive reliance of media upon few sources, which are sometimes seriously biased. Of all the news items analysed by the three scholars, a large deal had been copied from the reports of a news agency or from press releases by authorities or companies. Excessive reliance on these pre-packaged sources of news brings about content homogenization and it risks to favour the circulation of unverified or unattributed material.