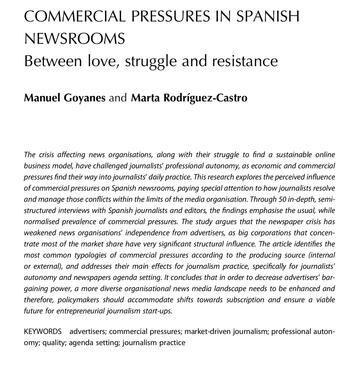 According to the 2016 Media Pluralism Monitor (published by the CMPF), commercial influence is a very significant risk for media pluralism. Spain is placed at a medium-risk level. However, claim the authors of this article, there is little evidence that sheds light on how commercial pressures are resolved and how internal socialisation processes work.

Authors posed two research questions: “What is the prevalence and phenomenology of commercial pressures in Spanish newsrooms, according to their main sources, agents involved (interactions), and management?” and “How are commercial pressures solved and how do they affect journalists’ daily practice and professional autonomy?”.

50 semi-structured interviews were conducted with Spanish journalists to examine how they respond to commercial pressure from newspapers’ advertisers. Participants were chosen in order to represent different news organisations, sections of newspapers, and professional autonomy. They were granted confidentiality.

The interviews were organised in three sections, concerning:

According to the results, all journalist interviewed had experienced commercial pressures at some point in their professional careers, and interpreted them as an intrinsic element of journalism.

Traditionally, only large holdings (such as El Corte Inglés, Banco Santander, and Telefónica) had the power to exert influence. With the crisis, local news outlets are increasingly being pressured also by medium and even small-sized enterprises.

External-direct pressures are exceptional. They usually require a fluent relationship between journalists and advertisers, mostly through press officers.

The pressure process usually happens after the story has been published, with the advertiser’s complaint reaching the journalist, but influences are effective even without being exercised because of self-censorship and consultations with managers, when some information generates doubts or is problematic for the newspaper’s interest.

While outright censorship is rare, most respondents try not to generate a negative image of advertisers and treat them with an excess of caution. The length of content affecting them is limited. Also, positive news about advertisers are published even if not otherwise newsworthy.

Sometimes the newspaper management offers clear guidelines on how negative news about certain advertisers should be treated. In some cases, published contents were changed or removed by the news organisation. When journalists do not agree, the most common tool to protect their professional autonomy is the withdrawal of the signature.

According to the authors, commercial pressure is the norm in Spain. The crisis has increased the bargaining power of advertisers. The authors suggest that, in order to decrease it, a more diverse organisational news media landscape needs to be enhanced: shifts towards subscription should be accommodated by policymakers and journalism startups should be supported.