Commercialization and Privatization of Media in Southeast Europe: A Wolf in Sheep’s Clothing? 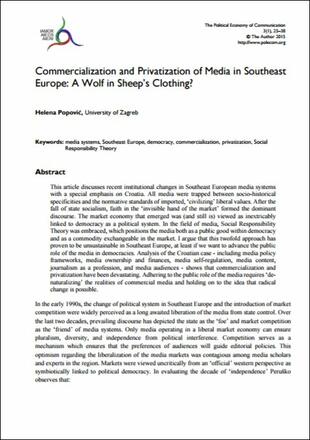 In the early 1990s, the change of political system in Southeast Europe and the introduction of market competition were widely perceived as a long awaited liberation of the media from state control. All media were trapped between socio-historical specificities and the normative standards of imported, ‘civilizing’ liberal values. After the fall of state socialism, faith in the ‘invisible hand of the market’ formed the dominant discourse. The market economy that emerged was (and still is) viewed as inextricably linked to democracy as a political system.

In the field of media, Social Responsibility Theory was embraced, which positions the media both as a public good within democracy and as a commodity exchangeable in the market.

The author argues that this twofold approach has proven to be unsustainable in Southeast Europe, at least if we want to advance the public role of the media in democracies. Analysis of the Croatian case - including media policy frameworks, media ownership and finances, media self-regulation, media content, journalism as a profession, and media audiences - shows that commercialization and privatization have been devastating. Adhering to the public role of the media requires ‘denaturalizing’ the realities of commercial media and holding on to the idea that radical change is possible.