Communication, Power and Counter-power in the Network Society 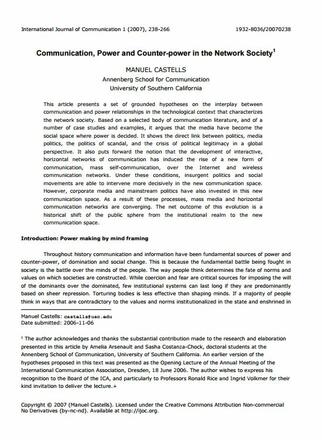 This paper focuses on the interplay between communication and power relationships in the in the context of globalisation, the crisis of political legitimacy and the emergence of new media technologies. Power making by mind framing has a key role in determining the fate of norms and values. Castells argues that in the network society, mainstream media are no longer the gatekeepers of political communication: rather, mass self-communication such as blogs, social media and the like have become the new social space where power relationships are decided and politics is scrutinized.

Castells sustains that, in our society, politics is primarily media politics. This does not mean that power is in the hands of the media, but rather that political actors exercise a relevant control over the media. Moreover, most of the times there is a “mediated visibility”, thus the absence of a given content in the media leads to the absence of such narrative in the public mind.

This study also highlights that media politics and personality politics led to “scandal politics”, which has been having the effect of causing a crisis of political legitimacy.

Moreover, Castells analyses the role of mass self-communication for insurgent politics, that allows them to gain a new kind of media space: while the mass media are largely controlled by business and governments, thanks to the new forms of communication people have built their own system of mass communication, through horizontal networks of communication. At the same time, however, mainstream media are using such networks as well, mixing them with vertical modes of communication (e.g. TV, radio, newspapers…). Furthermore, mass-self communication is self-generated and self-selected but this new media reality is increasingly suffering of the “traditional” political and economical schemes of control as “conventional” mass media are.