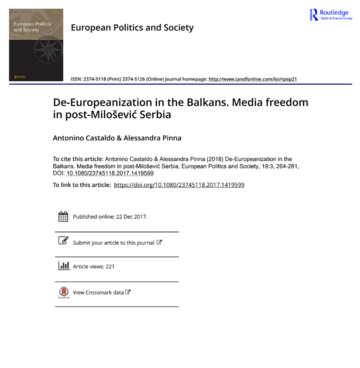 This digest has been produced in cooperation with Domenico Mercuri from the University of Trento, within the seminars "Come diventare un analista politico: ricerca, informazione, e divulgazione sulle politiche europee".

Freedom of expression through media is one of the founding principles of a democratic regime and of any state that wishes to be defined as such. The European states that had known the risks and dangers of censorship and repression of freedom of expression during the "fascism" that characterized the twentieth century, have elected the freedoms and the freedom of expression as a key principle of the European Union. The importance of this principle is also underlined by the publication of the 'Guidelines for EU support to media freedom and media integrity in Enlargement countries, 2014-2020'. Through these guidelines, the EU first defines the concept of media freedom and sets out the standards that states wishing to apply to become members of the EU must meet.

The article, however, relates media freedom to a new process that is characterizing some European states, including in particular those in the Balkan area: de-Europeanisation, defined as a process whereby integration into the European system meets resistances and contestations.

In fact, the authors try to understand if (and why) some European states, although being candidates for EU membership and expressing the formal will to join the EU, lack a real will and a concrete commitment to adapt different sectors of the state's life to the principles and values of the EU.

The authors analyze the case of Serbia, because: "being under the pre-accession conditionality - which has proved to be more effective respect to the post-accession conditionality oriented to EU member states - Serbia should be less affected by the phenomenon of de-Europeanization." The authors also point out that Serbia has historically played a strategic role in the stability of the Balkans, receiving much attention and resources from many international actors, including the EU.

In order to analyse the phenomenon of de-Europeanization in Serbia the authors focus on the sectors connected with media freedom. In particular, they provide a close analysis of the freedom of the media and the laws that have increased or reduced freedom of expression of media workers, along with the freedom of practices related to this sector.

The analysis is conducted by dividing the period 2000-2016 into three phases:

The paper demonstrates that the tendencies emerged in the media and freedom of expression can be better classified as part of a process of de-Europeanization, intended as a departure from the European model of media freedom. This result is considered “puzzling” because Serbia “has been constantly under the EU conditionality since 2000 and has progressed in its EU accession process”.

According to the conclusions of the article, and with specific regard to media freedom, the authors affirm that the role played by legacies of the past, a typical structure-related factor, cannot be underestimated in the Serbian case. Serbia seems to have been unable to deal with its past in a way that was acceptable to the EU, and kept showing an identity dominated by nationalism and ethnic unresolved issues. The paper shows how legacies of the Milošević regime burdened the Serbian media sector since the 2000 transition, due also to the lack of a strong EU incentive structure in this sector. Despite consistent EU incentives and pressures as well as socialization and persuasion processes applied on Serbia, the Balkan country has been stuck in a 'stalled Europeanization'.

However, the study concludes that neither an “‘external incentive model’ or the ‘social learning model’ can account for a complete explanation of the difficult Serbian Europeanization process. Instead, the unreformed nationalist ideology, the presence of strong veto players, and mutually hostile strategies of domestic political elites are the main factors explaining this outcome.”