In the last two decades, the term "fake news" has been used with several different meanings, which fall into six categories. It is possible to map them out according to their reliance on facts and their intention to mislead 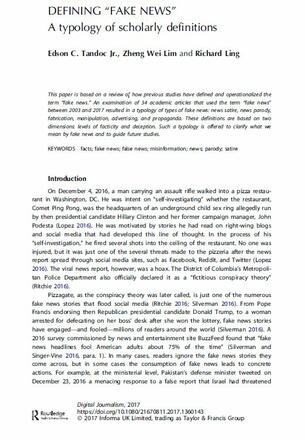 Even if the term “fake news” has recently become a buzzword, it is not new by any means; it has been used for years with different meanings and connotations. For this reason, the authors of the article – published in Digital Journalism  – reviewed the different ways in which the term has been employed, in order to build a typology of the available definitions. To this end, they took into consideration 34 scholarly articles that employed the term “fake news” between 2003 and 2017.

In the existing literature, fake news has been operationalized in six different ways: i) as satire, i.e. mock news programs injected with humour; ii) as parody, i.e. fictitious news stories with a vague plausibility, aimed at humour; iii) as fabricated news, i.e. articles with no factual basis, disguised as real news in order to misinform the public; iv) as manipulated or misappropriated images or videos, aimed at creating a false narrative; v) as advertising materials in the guise of genuine news reports; vi) as propaganda, i.e. news stories created to change the public's political attitude.

In order to map out the different conceptions of fake news, the authors propose a model based on two dimensions. The first dimension is facticity, and it refers to the degree to which fake news relies on real facts. The second dimension is the intention behind the news, i.e. the degree to which the author of fake news intends to deceive. The most recent understandings of fake news focus on pieces of news that are low in facticity and high in the intention to mislead, but other conceptions are possible.