In a paper published on First Monday, Emilio Ferrara studies the role of Twitter in the MacronLeaks disinformation campaign

Publication Date: August 2017
Link: Disinformation and Social Bot Operations in the Run Up to the 2017 French Presidential Election 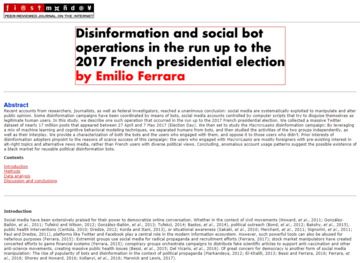 Two days before the second round of the 2017 French presidential election, a massive dump of emails by Emmanuel Macron and his team was leaked online. The authors studied the MacronLeaks disinformation campaign on Twitter. They consider it a “campaign” because it was a coordinated effort; of “disinformation” because the shared information was unverified. They examined the role of automated social media accounts (social bots and sockpuppets, excluding inactive fake followers) used with the intent to deceive and manipulate.

Researchers manually selected a set of hashtag and keywords associated with Marine Le Pen and Emmanuel Macron. They monitored Twitter from April 27 to May 7 (the day of the second round of the presidential elections) and collected 17 million tweets by over 2 million users.

Among those tweets, nearly 350,000 (2%), posted by nearly 100,000 users, are part of the MacronLeaks corpus, with hashtags such as #MacronLeaks and #MacronGate. The temporal pattern of the MacronLeaks is substantially different from the general conversation, starting only in the afternoon of April 30 and peaking between May 5 and May 6.

Authors implemented a system (partially inspired by Botometer) to detect bots capable of analysing the over 2 million users, including those who were later suspended. Their tool categorised about 18,000 of the 100,000 users involved in MacronLeaks as social bots. While in other cases bots posted huge amounts of tweets and retweets, in MacronLeaks they were less active, probably to avoid being located and suspended.

There is some evidence of the existence of an online market of reusable political information bots, as some of the same bots have already been used to support alt-right narratives before the 2016 US presidential elections. While most words occurring in the profiles of users not involved in MacronLeaks campaigns are in French, the top two key terms of MacronLeaks’ users are “MAGA” (“Make America Great Again”) and “Trump” itself. Most of the MacronLeaks tweets were in English, and they failed to influence the French audience.

Links in the general election discussion were mainly to tweets of presidential candidates or other politicians, articles in established news media, and influential users on external media channels or Twitter itself. Links in the MacronLeaks campaign were mainly to hyper-partisan news outlets, leaked data dumps, or fake news websites. The MacronLeaks tweet corpus was also less diverse than the one of the general elections.