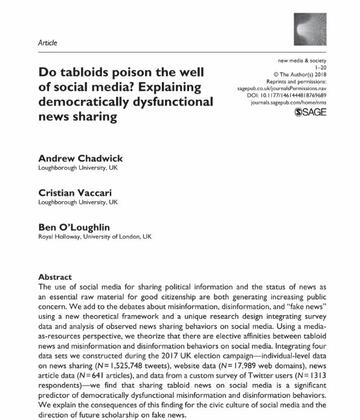 The article examines whether the quality of civic culture in social media environments is affected by the routine presence of tabloid news sharing. Considering sharing tabloid news on social media as a significant predictor of democratically dysfunctional misinformation and disinformation behaviours, the study explains the consequences of these findings for the civic culture of social media and the direction of future scholarship on fake news. It assesses whether tabloid news has elective affinities with online misinformation by using a unique blend of survey data and digital trace data.
The research integrated the analysis of large-scale, individual-level, social media data, website data, and news article data with our own, custom-designed survey of Twitter users. The first chosen population was Twitter users who, during the 2017 UK general election campaign, shared at least one news article related to politics published in one of the five most-read UK national tabloids: the Daily Mail, The Sun, the Daily Mirror, the Daily Express, and the Daily Star.

The study states that the “purest” forms of fake news—outright fabrications created by online news “factories” that exploit advertising syndication systems for financial gain—have so far been rare or nonexistent in many countries. According to study, in the United Kingdom, the inconvenient truth is that key among the media that matter are articles published by large-circulation, mainstream tabloid outlets, whose daily stock-in-trade has always been news of dubious civic value.

The research focuses on three key explanations to disentangle how tabloid news sharing might shape the quality of online civic culture: users’ motivations for sharing news on social media, the kinds of online networks in which users are embedded, and the types of media content they share. It explores whether these variables, together with a set of relevant controls, predict two behavioral outcomes: sharing news on social media, either knowingly or unknowingly, that was either exaggerated or made up, and being told by others on social media that the news one shared was not fully accurate, was exaggerated, or was made up.

According to the study, during the 2017 UK general election campaign, two-thirds (67.7%) of the survey respondents admitted to sharing problematic news on social media. The study finds that the number of tabloid news articles shared on Twitter is a positive and significant predictor of the likelihood of reporting sharing news on social media that was either exaggerated or fabricated. The more the users share tabloid news on social media, the more likely they are to engage in democratically dysfunctional news sharing and be challenged by users in their social media networks for doing so. The findings of the research shed light on the interdependence between media adaptation and changes in the character of civic life. It argues that democratically dysfunctional news sharing behavior is a potential systemic outcome of the tabloidization of the UK social media environment.

As the study shows, in some countries the content produced by some professional media outlets might be significant in the diffusion of misinformation and disinformation. Debates about fake news ought to pay attention to how hybrids of older and newer media—in this case social media combined with digitally adaptive tabloid media—can explain democratically dysfunctional online behavior.

The article has been published in 2018 on SAGE Journals