European University Students And Social Media. How Do They Talk About Online Disinformation In View Of The 2019 European Parliament Elections?

European students see misleading news as a threat to younger generations, but consider themselves immune as they are confident in their ability to detect unreliable web content. This is one of the findings of this master thesis, which examines students' attitude towards social media and disinformation online

Publication Date: August 2019
Research and Editorial Team: Luca Arfini, Department of Culture and Society of the Aahrus University in Denmark
Link: European University Students And Social Media. How Do They Talk About Online Disinformation In View Of The 2019 European Parliament Elections? 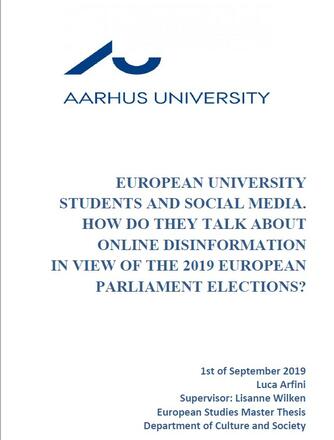 Being digitally native does not necessarily mean being media literate. This is one of the starting points of this thesis, discussed as a European Studies Master Thesis at the Department of Culture and Society of the Aahrus University in Denmark.

The author decided to conduct a thematic analysis, which uncovered eight themes, of four focus groups composed by a total of 42 European university students.

His research question was: “How do European university students talk about the use of social media and the issue of online disinformation in view of the 2019 European Parliament elections?”

As the author confirms, “there was a general understanding of the problem of online disinformation, described by most as a hindrance to a transparent and informed vote. However, even if the large majority of students outlined potential obstacles of accessing and reading a piece of information on the internet, especially on social media, this was rarely understood as something directly affecting them”.

The analysis is introduced by an academic overview of the post-truth phenomenon, with a description of what is disinformation nowadays, and by an overview of media literacy, its importance, and its use: the question is “Why do students need to be digitally educated to vote transparently?”. Another chapter contains data about participation of young people in the elections for the European Parliament.

The methodology is described as qualitative research aiming to understand a social phenomenon considering the context in which meanings are generated by a targeted group (Masue, Swai and Anasel, 2013).

As a method of data collection, the author decided that “the most appropriate to answer my research question was focus groups”.

“In the end, participants recognized that online disinformation can have a strong impact in our society during a period of elections campaign, especially if it is European Parliament elections; which are for them much less popular than national elections and thus surrounded by a more fragmented and unclear information environment”.

Acknowledging the limitations of his own research and that it is not possible to generalise its findings, the author supports the need for more extensive research on this subject.