Fake News as a Floating Signifier: Hegemony, Antagonism and the Politics of Falsehood

The paper, published on Javnost - The Public Journal, argues that “fake news” has become a “floating signifier”, something which is used by different factions as a part of a battle to impose their viewpoint 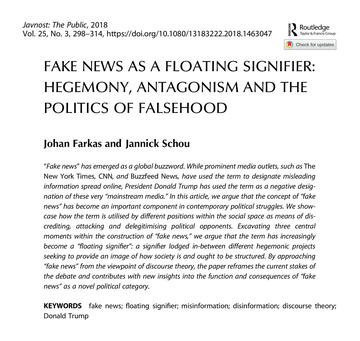 A Short Guide to the History of ‘Fake News’ and Disinformation

The authors claim that “fake news” has become a “floating signifier”, which is defined by Ernesto Laclau as a “signifier used by fundamentally different and in many ways deeply opposing political projects as a means of constructing political identities, conflicts and antagonisms”.  It is not just a case of polysemy, a signifier that has several independent meanings. It is instead used as part of a battle to impose a specific viewpoint onto the world.

While the moments of “fake news” may be more, the paper focuses on political discourse and antagonism, so it is limited to three moments.

The first moment is a critique of digital capitalism. The economic structure of the Internet is viewed as the primary reason for the circulation of fake news: false information feeds controversy and controversy feeds capital. Fake news also have lower production costs than real news.

The second moment is a critique of right-wing politics and media. The term “fake news” started to be used more before the American presidential election in 2016 and reached a peak around Donald Trump’s inauguration as the 45th President of the United States. It is claimed (e.g. by Paul Krugman) that liberals are less prone to fake news than conservative voters. Right-wing websites are marked as fake news and the lines between fake news and right-wing opinion became blurred. It was claimed that Facebook had instruments to fight fake news on socials, but it refrained from using them for fear of conservative backlash. There was an attempt to couple “fake news” with Donald Trump and his supporters, and more generally with the American right-wing.

Trump reacted firstly by calling “fake news” a “witch hunt”, or in other terms a “political construct created in order to attack and delegitimise his presidency”. Then he started using the term himself to attack mainstream media, accused of promoting a liberal agenda against the American people. While the discourse against mainstream media is not new, “fake news” is a new signifier in the battle. This leads to the third moment, a critique of liberal and mainstream journalism.

“Fake news” has thus became a floating signifier, epitomising a discursive struggle and perhaps even an organic crisis, a period in which the pre-existing symbolic structures no longer seem to hold any validity. The emergence of the concepts of “post-truth” and “post-factual” seems to confirm this impression. What is ultimately at stake is who obtains the power to define what is deemed as truthful.