Fighting for recognition: Online abuse of women bloggers in Germany, Switzerland, the United Kingdom, and the United States

This study argues that democratic potential of social media in democracies remains haphazard because online abuse is not fully recognized as entangling online and offline communication, constituted and constructed through technological, legal, social, and cultural factors. It is based on interviews with 109 bloggers who write about feminisms, family, and/or maternity politics. According to the findings 73.4% had negative experiences due to blogging and/or social media use 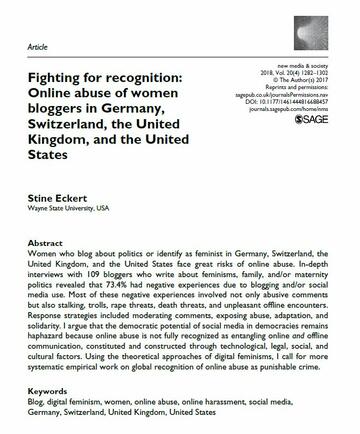 The study states that democratic potential of public online spaces where women can express their concerns remains haphazard in democracies. Online abuse needs to be taken seriously and addressed through all its contributing factors (in no particular order): the gendered constructions and affordances of online technologies, a lack of an appropriate legal framework and enforcement, and a continued history of rape culture and misogyny.
The study shows that women who blog about politics or identify as feminist in Germany, Switzerland, the United Kingdom, and the United States face great risks of online abuse. The author conducted interviews in these four countries between 2013 and 2014 with 109 bloggers, aged 22-69 years, who write about feminisms, family, and/or maternity politics.

The study underlines that the most salient finding was the high level of negativity and abuse that bloggers said they experienced: 73.4% (80 of 109 women) recalled an unpleasant encounter. The paper suggests that every woman is expected and controlled in her expressions online to follow accepted behavior. Feminists have transgressed these expectations using digital media to continue fighting for long-standing issues and addressing new issues born out of digital interactions. Of the 80 women with negative experiences, 26 said they faced trolls and/or so-called shit storms. The latter involve a large number of insulting and/or outraged online comments to/about a blogger in a short period of time. The most frequent negative experience interviewees noted were, by far, abusive or insulting comments: 69 of 80 women with negative experiences said they had received hate mail (rape threats and death threats were counted separately) via comments on their blog/site, tweets, or email.

The research confirms other studies showing that women face a greater risk for (sexual) harassment when online. Moreover, women who identify as feminist, regularly write about “traditional” political issues, and/or redefine what counts as political face a higher risk of online abuse than those who do not identify as feminist and/or write about or challenge “traditional” politics. To counter and prevent these attacks, the author suggests that legal, social, and cultural recognition of discriminatory and criminal behaviors in enmeshed online–offline communication are needed. As the Internet is crucial to pursue opportunities, online speech must be regulated in ways that ensure everyone has a fair chance to participate. According to the scholar, if countries recognize the Internet as a public utility, fair Internet participation might rise to the status of a human right recognized by international bodies, such as the United Nations. More systematic empirical work on global recognition of online abuse as punishable crime is therefore needed. However, because legal and regulatory frameworks seem to be bound to remain behind fast-developing technologies and the ways people interact with and through them, social-cultural determinants also emerge as essential in trying to solve the issue.