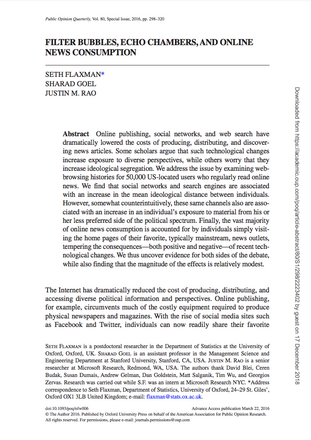 Online publishing, social networks, and web search have dramatically lowered the costs of producing, distributing, and discovering news articles. Some scholars argue that such technological changes increase exposure to diverse perspectives, while others worry that they increase ideological segregation leading to the so called “echo chambers” and “filter bubbles”. After presenting the academic debate in this field, the article addresses the issue by empirically examining the data of 50,000 US-located users that regularly read online news. Authors found that articles retrieved via social media or web-search engines are associated with higher ideological segregation. However, data also show that these channels are associated with greater exposure to more diverse  and heterogeneous perspectives. Another finding shows that the vast majority of online news consumption reproduces traditional offline reading habits, thus tempering the consequences—both positive and negative—of recent technological changes. To sum up, this study uncovered evidence for both sides of the debate and found that the magnitude of the two alternative effects is relatively modest.

Finally, authors present some limitations to their study by highlighting some methodological choices and shortcomings. Despite these limitations, authors believe that their findings provide an empirical starting point for understanding how novel means of news consumption affect ideological polarization.