The paper analyses the role of the media in establishing and maintaining modern-day authoritarian regimes. The authors offer a formal account of how such systems work, emphasising the importance of the gap in political knowledge between the “informed elite” and the general public as a key element of informational autocracy 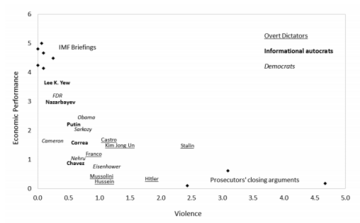 Through the years, the goal of non-democratic leaders has remained the same – to concentrate power in their hands. Until recently they employed mass violence, ideological indoctrination, and closed borders, among other tactics, to monopolise power. Yet, in recent decades, a major shift in the strategy on how to establish and maintain such systems has occurred. Unlike past totalitarian systems, authoritarian leaders of today distort information flows in order to boost their popularity and maintain their power.

The strategy exploits the gap in political knowledge between the “informed elite” and the general public. Namely, for authoritarian leaders to successfully consolidate their power whilst mimicking democracy, they need the “informed elite” to convince the citizens that they are competent and benevolent. In doing this they buy elite’s silence, censor or co-opt private media, and broadcast propaganda about their competences and success. By doing this they create a parallel reality in which citizens do not realise they are being held down.

The reasons for this shift in the strategies of authoritarian leaders are complex. Economic modernisation and spread of higher education make it harder for authoritarian leaders to control the public by means of crude repression. Also, several other factors are highlighted by the authors. Also the decline in the appeal of authoritarian ideologies since the end of the Cold War has weakened old models of autocracy, then the global human rights movement and new information technologies have raised the cost of visible repression, among other factors.