Is There a Future for Journalism?

This study published in the journal Journalism Practice focuses on political and economic matters impacting journalism's future, the safety of journalists, and internet governance

Publication Date: September 2018
Research and Editorial Team: Guy Berger
Link: Is There a Future for Journalism? 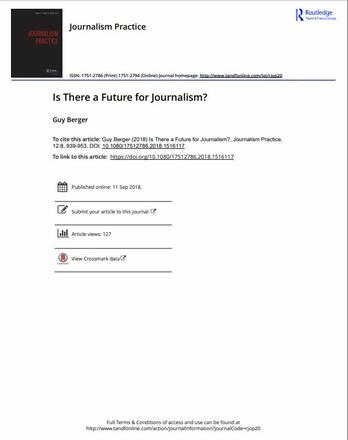 The study examines the future of journalism, concentrating on the influence of UNESCO on public agendas and the international framing of journalism. The study states that the concerns for the future of journalism are a huge increase in pressure on addressing issues around the safety of journalists; predominant ‘masculinist’ and positivist conception of facticity and journalism’s unhappy intersections with populist discourse in which a patriarchal figure is the definer of public communication. These diverse issues show that what happens to journalism as a practice contributing to societal transparency is complexly bound up with the wider processes of protection or erosion of privacy.

According to the research, the Internet is implicated with pluralism and independence through the highly interconnected issues of individual freedom of expression, press freedom, and media freedom which UNESCO reassesses, including it in the framework of its reports on World Trends on Freedom of Expression and Media Development. The study confirms that UNESCO nowadays works to affirm that the basic human right to freedom of expression should be protected and promoted both off- and online.

The study finds that more and more countries are making progress in passing right to information laws, while there is also increasing suppression of the publication of information. Therefore, greater transparency is closely associated with greater limitation on the right to impart information.

As stated in the paper, journalism has always been affected by matters such as a society’s general criminal code, the legal space for independent publishing, the availability of electricity, and the level of literacy. According to the study, these factors have led to the identification of a number of paradoxes, such as social valuation of journalism; diverging economic impacts; digital ambiguity; and historical role of journalism.

The paper suggests that Rights, Openness, Accessibility, and Multistakeholder participation (ROAM principles), evoked by The Internet Universality concept of UNESCO, can be used by interested stakeholders to carry out research on Internet Universality at country level, using an internationally-endorsed standard. Hence, the outcome of such research can identify particular gaps that need attention, and make appropriate recommendations for policy change.

According to the study, if journalism has a future, it will be inextricably bound with its multiple intersections with digital issues across production, dissemination, and societal impact. What the study portends for the future is the safety of journalists as an existential condition for the practice of journalism or an opportunity in the form of a response that seems set to keep growing. However, in a global climate where many political leaders seek to delegitimise journalism, the climate for governments actually taking attacks more seriously and addressing them institutionally will still require much work in order to achieve positive results.

Tags: Safety of journalists Freedom of expression Access to information