Is the EU Disinformation Review Compliant with EU Law?

A complaint to the European Ombudsman about EU vs Disinfo 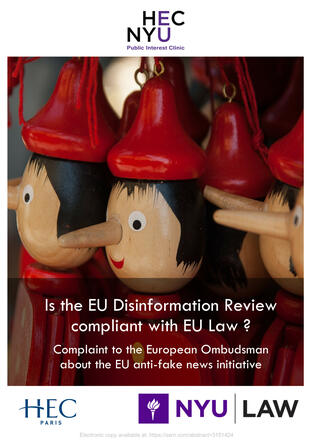 A complaint was filed to the European Ombudsman by Alberto Alemanno about the EU Disinformation Review (EU vs Disinfo) by the the East StratCom Taskforce of the European External Action Service (EEAS). The paper was written by two students (Maxime Fischer-Zernin and Justine Brogi), supervised by Alemanno and Paige Morrow as a part of the EU Clinic.

Alemanno had asked the EEAS for documents about the definition of disinformation used by the East StratCom Task Force, its partnership policy, its reporting policy, and relevant correspondence with other EU institutions. The EEAS replied that no such documents existed, and referred to the conclusion of a 2015 European Council calling for the establishment of a strategic communication team to challenge Russia's ongoing disinformation campaigns.

Alemanno reiterated the request, arguing that the absence of such documents would qualify as an act of maladministration and that those who were listed as disinformation examples were lacking legal protection, violating the principle of legality.

EEAS answered with a statement from EU vs Disinfo website explaining that:

Alberto Alemanno thus filed a complaint with the European Ombudsman, claiming that the EU Review’s fact-check analyses are indeed statements of the EU administration. According to the complaint, the EU review does not respect the International Fact-Checking Network’s code of principles because its methodology is not transparent: the lack of a public methodology violates the right of the public to be properly informed, and the rights of good administration as it means that the large margin of discretion they have in identifying disinformation cannot be justified on the basis of objective criteria.

Authors also claim that the EU Review violates the right to freedom of expression by labelling publishers as “disinforming outlets” and their content as “disinformation”, creating a chilling effect, and the freedom of the press by labelling media outlets that report on third party opinions (which should not be in the interest of a fact-checker) that are contrary to EU positions as “disinforming outlets”. It also fails to provide objective impartiality, as it does not provide the right to be heard and it does not fulfil the duty to motivate, as it often uses a general and stereotypical formula.

Authors cite an example in which the website accused of disinformation De Gelderlander, a Dutch newspaper, removed the claim after a legal complaint.

Authors believe that EU Review should develop a methodology for reviewing fact-checks and selecting partnership and a notice and response mechanism, or it should be shut down. EU Review should adhere to the International Fact-Checking Network Code of Principles and to the suggestions of the Report of the High Level Expert Group on Fake News and Online Disinformation.