Johnston Press and the crisis in Ireland’s local newspaper industry, 2005-2014

Local press is not only experiencing declining circulation and revenues, but also a process of corporatisation. The case of the Irish industry illustrates very well some of the main ongoing trends in the field 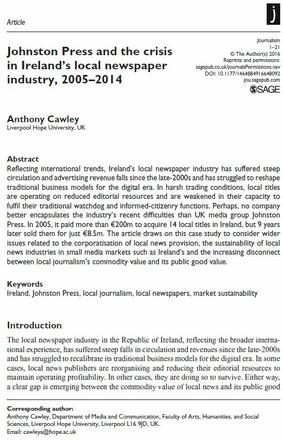 Local newspapers rarely end up in the spotlight, even if they play a central role in informing and forming the public opinion, especially outside of the main cities. Like the rest of the publishing industry, in the last decade local newspapers have been experiencing increasing financial problems in many countries, as circulation and revenues have been falling since the late-2000s. The problem with local press, is that it is even harder for it to find profitable digital strategies – because of their small size, and even because of their very identity, which is based on a close connection with a geographically concentrated community.

Ireland offers a particularly interesting vantage point on the ongoing crisis and process of change of the local press in Europe: the problem of financial sustainability of media outlets is even more pressing in small countries, where there is limited scope to pursue economies of scale and to develop successful digital strategies. In this context, it is worth recalling that "Ireland has one of the most concentrated media markets of any democracy," as a 2016 report argued.

Anthony Cawley looked at a major development that affected the local newspapers' industry in Ireland in the last 15 years or so, namely the entry into the market of the British Johnston Press media group. In 2004, the group bought 14 local newspapers in Ireland, which was a thriving market at the time: it was the biggest foreign investment in the local newspaper industry in the country, and a major investment for the group. The move was in line with a more general phenomenon of corporatisation of local news provision, which consists in a concentration of the ownership and in the partial detachment of journalists and editors from local communities – because of the partial merging of newsrooms and management.

The Johnston Press's investment in the Irish media market was unfortunate, as the economic crisis out-broke shortly afterwards. As the author points out by analysing the company's financial reports, readership, advertisement, and the carrying value of newspapers themselves fell sharply year after year. Despite some efforts to develop the digital side, revenues remained very low, to the extent that Johnston Press was forced to sell all its Irish newspapers in 2014 (for a much lower value compared to 2004).