The study highlights that the influence of junk news is far less prominent on Twitter (4% of total sources), while the engagement of junk news is higher on Facebook, but the recipients of professional news outnumbered the former 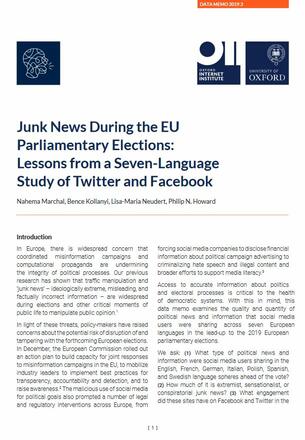 Junk News and Bots during the German Parliamentary Election: What are German Voters Sharing over Twitter?

Misinformation campaigns and computational propaganda have been a cause of widespread concern and a prominent issue in pre-election times. This is why policy-makers have tried to counteract this phenomenon through action plans aimed at promoting joint responses, mobilising industry leaders, raising awareness, and prompting legal actions against social media companies.

This data memo examines the quality and quantity of political news and information shared through social media across seven countries (England, France, Germany, Poland, Italy, Spain, and Sweden) in the lead-up to the 2019 EU parliamentary elections.

The scholars focused on 4 central issues: 1- the type of political news that was shared on social media; 2 - the quantity of extremist, sensationalist, or conspiratorial junk news; 3 - the level of engagement these sites had on Facebook and Twitter in the weeks leading up to the vote; and 4 - the most common themes and narratives relayed by junk news outlets.
Researchers selected over 137,000 tweets, extracted from a collection of over 584,062, between 5 and 20 April (5 May in the case of Facebook). They found that these tweets, which contained a URL link, pointed to a total of 5,774 unique media sources.

Then, a team of nine multi-lingual coders, using a rigorous grounded typology, classified the sources that were shared five times or more across the selected period. Each source was coded individually by two separate coders. This way, it was possible to label almost 91% of the links shared during the data collection period.

Moreover, the researchers extracted the five most popular sources of junk news for each language, measuring the volume of Facebook interactions with these outlets in the month preceding the election (5  April–5  May). In order to have a comparison, the same procedure was used to find the 5 most popular professional news sources. Finally, a thematic analysis was conducted on the 20 most engaging junk news stories on Facebook to discover the most popular narratives of junk news stories on Facebook.

The main findings of the study are:

On Twitter, the ratio of junk news sources ranged from 1.4% and 1.6% of the English and Spanish language spheres respectively to 21% of the Polish one, but it is worth noting that traffic in the Polish sphere - together with the Swedish - was the lowest overall. In addition, the vast majority of sources of junk news were not linked to known Russian sites but to local, national, and hyper-partisan ones. Other content produced by independent citizens, civic groups, and civil society organisations, including a number of get-out-the-vote initiatives, was widespread in the German and English spheres (16% and 21% of traffic respectively).

The study highlights that professional and mainstream news outlets dominated shares on Twitter, especially in the Swedish sphere (55%). A similar trend was observed in Spanish and French  tweets. On the other hand, links to the websites of political parties, governments, and political  candidates were considerably low for tweets associated with Italian (14%), Polish (7%), and Swedish election hashtags (6%).

Researchers measured the total and average volume of interactions (likes, shares, and comments) on Facebook using the NewsWhip Analytics dashboard, with three striking findings. First, junk news sites were less prolific than professional ones; second, junk news posts tended to be on average far more engaging.  In 5 out of the 7 seven languages (the exceptions are the Italian and the Polish spheres), individual stories from popular junk news outlets received on average between 1.2 to 4  times as  many likes, comments, and shares than stories from professional media sources. This is explained by the fact that junk news sites often rely on click-bait headlines. Finally, total interactions of professional news sources outnumbered junk news ones due to higher overall following.

As regards the key themes of junk news stories, the researchers found that most sources sensationalised political and social events to support an ideological position. The main narratives concerned migrants, Muslims, terrorism, and violence, while the share of stories related to European politics was much lower.

The report concludes by stating that political discussions associated with the 2019 EU parliamentary elections were mainly associated with high-quality sources, compared with other elections previously monitored.