Junk News and Bots during the German Parliamentary Election: What are German Voters Sharing over Twitter? 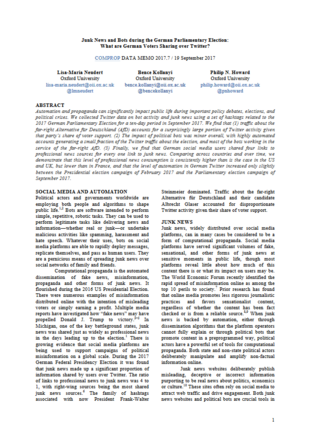 The study starts by considering that political actors and government worldwide are employing both people and algorithms to shape public life. Computational propaganda, as the "automated dissemination of fake news, misinformation, propaganda and other forms of junk news", became widespread during the 2016 US Presidential Election.The aim of the misinformation distributed online was to mislead voters or simply eraning profit and several studies tried to analyze how it could have affected Donald Trump's victory.

The same trend has been seen in Germany in the weeks before the 2017 elections, when several examples of computational propaganda circulated on social media, "sparking
public concerns of voter manipulation and election meddling". The authors of the article  took into examination a dataset containing approximately 984,713 tweets generated by 149,573 unique users, collected between the 1st and 10th of September 2017, using hashtags associated with the primary political parties in Germany, the main candidates, and the election itself.

The study followed the following method:

- Twitter traffic on the candidates and supporting parties were compared;

- Levels of automation for each candidate have been invesigated;

- The sources of information being shared has been categorized;

- Finally, the analysis has been compared with researchers? previous findings on computational propaganda.

The researchers conclude that the traffic generated by the far-right Alternative für  Deutschland  (AfD)  accounts was much higher than party’s share of voter support. They also find that most political bots were working in the service of  the far-right AfD, although the political bots’ overall impact was minor. The study also highlights that German social  media  users  shared four links to professional news sources for every link to junk news. Figures appear as much higher when compared with users’ sharing habits in the US and UK, but lower than in France.