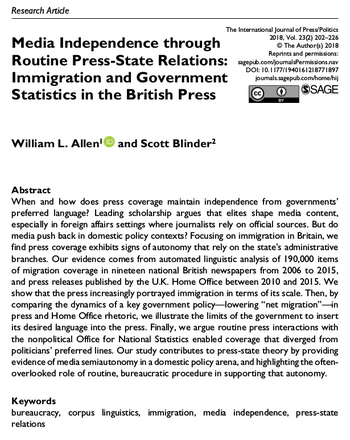 According to Press-State Relationship theory, the press tends to “index” the narrative provided by official sources; government “spin” can be disrupted only in exceptional circumstances, namely by “unexpected and dramatic news events”, “skillful oppositional communication strategies”, and “investigative journalism”.

The authors of the report seek to demonstrate that, when news is co-produced with information provided by civil servants (professionals that are neither elected nor politically appointed), the spin can be routinely disrupted, thus fostering media independence.

The case study is based on coverage of immigration. Two government departments are involved here: the Home Office (the British Interior Ministry) and the Office for National Statistics (ONS), which is a non-ministry department and an independent agency.

The authors built a corpus of 190,657 articles on immigration from 19 British newspapers from 2006 to 2015. They then scraped documents classified by the Home Office as relating to borders and immigration from 2010 to 2015 (348 items).

Using methods from computer-assisted corpus linguistics to analyse the texts, they found out that the most commonly used modifiers (“words that describe, characterise, or intensify another word”) for the words “immigration” and “migration” were “net”, “mass”, and “illegal”. In 38% of instances, modifiers were used to describe immigration or migration in terms of scale or pace (“net”, “mass”, “uncontrolled”, “large-scale”, “high”, and “more”). The analysis of these occurrences over the selected time period showed an increase in use of these modifiers, while there was a decrease in modifiers related to legality, such as legal or illegal.

Examining the occurrences of the expression “net migration” (or “net immigration”), researchers found a relative stability from 2006 to 2013 and an increase from 2013 onward. David Cameron's government used the expression in the beginning of its mandate, and during the campaign (when Cameron won the 2010 general elections, one of his main campaign promises was to reduce net migration). If looking at the corpus of official news and press releases by the Home Office, “the phrase was more visible in 2010 and 2013, but declined in 2014 before nearly disappearing in 2015”. This can be explained by the fact that while the plan to reduce immigration was successful from 2010 to 2013, the numbers reversed from 2013 to 2015. Therefore, after 2013, the communication strategy of the Home Office reduced references to net migration, concentrating on net migration from non-EU countries (which was still decreasing), and eventually gave up on the expression altogether.

As we have seen, newspapers did not follow that spin. Since 2009, the ONS had been producing statistics about net migration in the UK. By re-examining the newspapers corpus, authors found a substantial increase in the number of citations of those statistics in 2014 and 2015, when those figures were demonstrating the failure of the electoral promise.

The authors excluded the significance of other factors, such as external events, public interest, and political opposition.