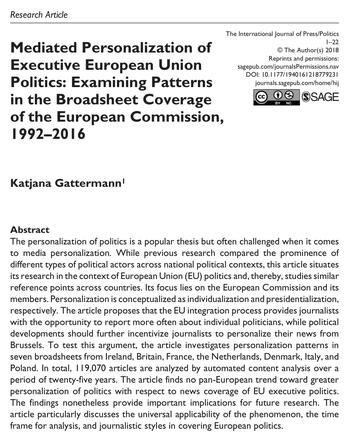 “The coverage by La Stampa was high under Italian Commission President Prodi between 1999 and 2004. Moreover, the coverage by the Irish Times peaked in 2010, when Ireland had to agree to a bailout by the EU and the IMF given its sovereign debt crisis. The Guardian had the most comprehensive coverage in 2016, when the British voted to leave the EU”.

The content of the articles was analysed with automatic systems. The main conclusion was that there is no European trend toward greater mediated individualisation of the members of the European Commission. In particular, there is no higher personalisation with every new phase of formal EU integration or when a new Commission takes office. Rising unemployment rates in the country where the newspaper is distributed also have no effects.

National journalist cultures seem to matter as “individualisation scores are highest in the French and Italian newspapers, similarly high for the Irish Times and the Guardian, comparatively lower in both Danish and Dutch broadsheets, and even lower in Gazeta Wyborcza”.