This research paper, published on the Security Dialogue journal, identifies and discusses the practice of "neutrollization", a trolling practice aimed at neutralising civil society attempts to cast the Kremlin regime as a societal security threat 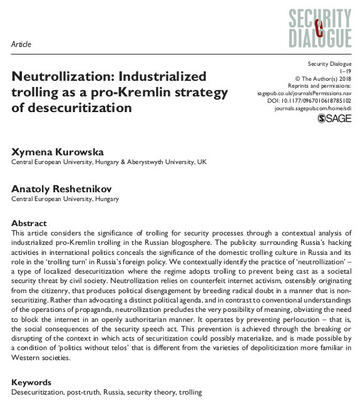 The authors introduce the concept of “neutrollization”, a new trolling practice. Originally, trolls only seek to have fun (“lulz”) by provoking other people and making them angry. Genuine trolls to not take anything seriously and thus do not support any political position. Ethical trolls might instead take position, e.g. against censorship.

Kremlin trolls are different, as they do not troll for fun or for an idea of justice, but as a job, following guidelines. However, while their purpose is to shield the regime, they do not do so by pushing for a specific (pro-Kremlin) political position, but by making a political debate (against the regime) impossible. They generate meaninglessness to neutralise attempts by civil society to cast the government as a threat and to create a context in which political mobilisation against the regime is absurd.

“Neutrollization” is thus a type of desecuritisation through trolling. The Internet Research Agency (IRA), infamous as a “troll factory”, was created for this purpose in 2013 after a nationwide wave of protests.

The paper is based on an interview by Moskovskiy Komsomolets journalist Eva Merkacheva to a former troll, Maksim. In the article, Maksim correctly predicted that the article would be flooded with hateful, obscene, or nonsensical comments, making a meaningful discussion impossible.

The authors talked to another former troll, Iwan, who explained IRA has both “worker bees”, working on quantity, and an elite department, working on quality. The former write comments as those cited above, or blog posts on LiveJournal. The latter create accounts that are retweeted by celebrities and politicians and get cited in international information agencies.

As a case study the authors consider the assassination of Boris Nemtsov, 2015. Nemtsov was a former vice-premier and the unofficial leader of the Russian opposition. Leaked documents shows that after his death the trolls were instructed to switch from the issue of Ukraine to his murder, with the aim of demonstrating that the government had no interest in his death, which was instead an obvious provocation that could benefit the opposition, the USA. or Ukrainian authorities (which were to be directly blamed).