The article analyses news-gathering on social media, focusing on theories of opinion leaders and the concept of incidental news consumption. The research uses a combination of representative survey data and qualitative interviews with young people aged 16–19 in Sweden 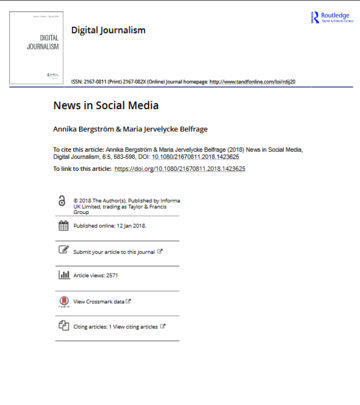 The aim of the study is to reveal how young people use news in their social network site (SNS) feeds, whether use is incidental or deliberate, and what role opinion leaders play for news consumption on SNSs. The study design includes a self-reported frequency data on news consumption of the Swedish population collected in the national Society, Opinion, Media (SOM) survey. To achieve in-depth insight into young people’s use of news in social media, with regard to incidental consumption and the role of opinion leaders, group interviews with 44 young adults aged 16–19 were conducted during spring 2016. The combination of survey method with in-depth interviews in the study allows to capture motivational, individual, and structural factors as well as situational aspects.

According to the research, the share of readers of news on social media in the age group studied is 91 percent, which is strongly related to socio-demographic background, formal education, and political interest. It is also likely that general online news habits might influence news use via SNSs among the young persons studied. The results of the questionnaire show that  social media are the most common way for the young interviewees to obtain news. Facebook is the platform which is mentioned most often, but Instagram, Snapchat, Youtube, and Twitter are also present in their SNS news context.

The findings of the research show that more than half of the interviewed students get news incidentally in their feeds. The study states that there is a grey zone in SNS news consumption between incidental and more deliberate ways of obtaining news, compared to its acquisition through traditional news cycle. However, the study also indicates a degree of awareness of this among the young participants.

The study also indicates that opinion leaders are perceived as central or even crucial to the news-gathering process. Counting on others means that one seeks out sources other than traditional news distributors, hence the interviewees identified the importance of the source for its credibility and the importance of the topic for their personal interest. However, participants’ interest increases significantly when news are shared or commented on by a friend. The study reports that many of the interviewees acknowledged opinion leaders' filtering, interpreting, and decoding function. This seems to stem from an awareness of a particular need for help in orienting oneself within the news media landscape.

The survey analysis shows that there might be differences also within the group of young adults with regard to news habits in SNS, and to further widen the scope of incidental consumption and the role of opinion leaders, there is also a need for in-depth studies with young persons post-high school. Finally, the study points to the need for more research on what is actually perceived as news in today’s media landscape, adding that the boundaries people draw between news and other information are definitely shifting.