In an article published on New Media & Society, Joanna Szostek examined the news media repertoires of a group of Russian university students, finding that, while they do not trust state media, they nonetheless internalised their strategic narrative 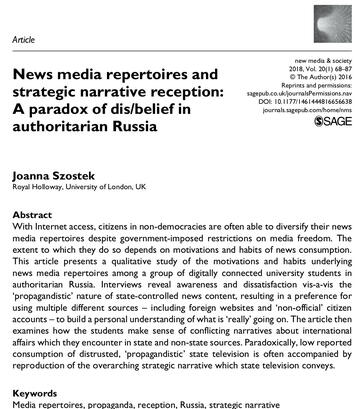 This digest has been produced in cooperation with Noemi Vidakovic from the University of Trento, within the seminars "Come diventare un analista politico: ricerca, informazione, e divulgazione sulle politiche europee".

Given that the existence of a consolidated, pluralistic media system is one of the criteria by which democracies are categorised as such, the Internet has made alternative sources of information accessible in many non-democratic states too, where different forms of journalism restrictions and censorship are imposed from the top. By taking Russian university students as sample, the article aims to investigate the digital connections of individuals in an authoritarian media environment and their reactions to conflicting narratives about their country's role in international affairs.

Hasebrink and Domeyer define a media repertoire as "the entirety of media" a person uses regularly, conceived as a "meaningfully structured composition" of information meant to satisfy the user's needs. The concept of media repertoire was first applied to news consumption studies in the 1980s: since then it has evolved, from concerning TV viewers' behaviour to representing the sources individuals use to get information about a certain topic, often by integrating pieces of information from different platforms. Taking this into consideration, the study examines the motivational, structural, and environmental factors which push individuals into accessing particular contents and the online "eco chamber" effect generated by personalised content algorithms. Moreover, it shows how news consumption habits make routinised media repertoires last longer than the reasons which first contributed to their success: as a result, users might consider certain sources negative or unreliable, yet keep consulting them. The analysis of media repertoires is thus functional to the understanding of strategic narratives in non-democratic environments, where news outlets can be either aligned with or independent from state control, with relevant geopolitical consequences.

The concept of strategic narrative is related to the influence exerted by mass communication in international affairs by emphasising or minimising certain aspects of reality, in order to persuade the audience of the narrator's vision. Politics is therefore conceived as a sequential process of competitive, strategic narratives carried by opposing sides' governments, diplomacy, and international broadcasting; quoting Joseph Nye, a nation's foreign policy success depends on "which story wins". Nevertheless, despite analysts' strong focus on the instruments and funds involved in narrative formation and projection, less attention is devoted to its reception among target audiences, which is actually key to its effectiveness. For instance, headlines accuse Russia of affecting European elections by funding propaganda, yet no studies have reported evidence of its consumption or reception in Europe. That said, the study of strategic narratives, along with the concept of media repertoire, offers a criterion of distinction between different media audiences – avoiding geographical categories - and provides diverse treatments and reception processes in terms of the range of media they consume.

The empirical part of the study involves twenty interviews conducted among second-year students at the Higher School of Economics (HSE) in Moscow, and aims to examine their news consumption, media behaviour, and exposure to particular strategic narratives. HSE is one of the most prestigious Russian universities and is considered as a relatively liberal environment, where students are proficient in English and enjoy diversity of choice in information sources, which means they are more aware of international politics and foreign media than most of their compatriots, which makes them an ideal sample for the study. Participants were asked five questions concerning the current state of relations between Russia and the West and the media they use to get information about the issue. The answers to the first set of questions were then compared to the Russian government's strategic narrative about tensions with the West, which conceives the United States as a global ruler that dictates to other countries rules it does not respect, and imposes its dominance onto the whole Western world, too weak to resist it.

The study then reports the main findings of the interviews. On the one hand, despite no one of the interviewees declares watching state TV channels as part of an active search for news, they recognise their influence as a result of parental habits. On the other hand, they indicate the Internet as their main information source, which they prefer for different reasons and approach in various ways. Most of the students create their own understanding on a matter by combining multiple sources, many of which are English-language or non-Russian websites. Nevertheless, all participants internalised some crucial points of Russian state strategic narrative that reverberated in their own narratives. For instance, some of them attribute to Western aggression the responsibility of current tensions between Russia and the USA. The latter is also regarded as guilty of not recognising Russian independence and interests and of imposing its values to other countries; Europe is often seen as subjected to the United States.

The closing paragraph of the article highlights the paradox of "believing the message while disbelieving the messenger" which emerged from the interviews. Although more and more people in Russia are coming to rely on the Internet rather than state TV as an information source, the resonance of the government's strategic narrative is still powerful. This happens not only because of the existence of government-aligned news websites, but also because the Russian administration covertly spreads its narrative in online discussions through bots and paid ‘trolls’. Nevertheless, much research on the topic remians to be done.