A case study of the French political landscape on Twitter during the 2017 presidential election, and how different political communities share fake news and debunks 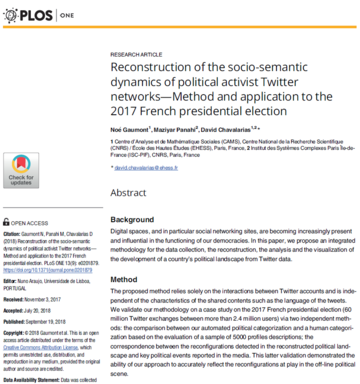 The authors of the paper developed a method to analyse and visualise the development of a country's political landscape from Twitter data and tested it on the 2017 French presidential election. Instead of analysing the content of the tweets using automatic language processing, they analysed the structure of the exchanges made on Twitter. They searched for “links” between users, specifically retweets, which according to pre-existing research are the most useful to rank accounts according to political orientation, even if sometimes they have a different meaning. The more two accounts retweet each other, the more they are connected.

They collected and analysed almost 60 million Twitter exchanges, including over 3,000 by key French political figures and few dozens political keywords across over 2.4 million users. They searched the political twittosphere by social groups - dense networks of accounts that recurrently retweet each other - and labelled them after important political figures. Many accounts (“the sea”) do not belong to any community. Some candidates did not use Twitter much, so their community was not analysed. The vast majority of retweets happens inside a political community, thus generating a strong echo chamber effect.

Le Monde has collected URLs of web pages and Facebook posts that include fake news in a database called Decodex. The authors searched for these URLs in their tweets, and found only 4,888 shares of fake news links (0.081%). While the Decodex database might be not complete, this still appears to show that fake news are not heavily shared in France by people interested in politics. Debunk links were even less shared: 1,275 times (a quarter of the fake news links). However, they also found that while fake news reach more accounts than other news, they also reach less communities than other news. Also, fake news on Twitter are primarily spread by political communities (and not all of them), not from accounts not belonging to any community. In particular, the communities of Fillon and Le Pen are the most active in the practice of fake news sharing within communities, and they have also  the highest percentage of early spreaders. Hamon's community is the least active. Macron's community is most active in spreading debunk link, with many also circulating between unaffiliated users. Macron and Mélenchon are the ones with most early spreaders of debunk link.

The political landscape is split between those who produce or spread fake news and those who produce or spread debunks. This must be taken into account when developing anti-fake news strategies. One must also be aware that debunks do not always work, meaning that a part of the audience might still choose to believe the fake news source. Worse, spreading debunks might actually lead a community to find and believe fake news. There are also two good news: fake news tend to spread in fewer communities than other news, and they do not seem to be particularly popular.