The European media discourse on immigration and its effects: a literature review

The authors of these paper, published on the Annals of the International Communication Association, conducted a literature review of the studies about media coverage of and media effects related to immigration in Europe 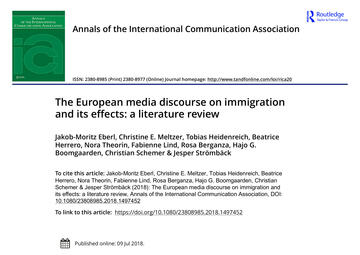 How does the media on both sides of the Mediterranean report on Migration?

The European "migration crisis" and the media. A cross-European press content analysis

From 2000 to 2018 there was a sharp increase in research concerned with media coverage of and media effects related to immigration in Europe: the authors conducted a literature review on these studies. The two main strands of research in this field are agenda setting (news tells us what to think about) and framing (news tell us how to think about things).

More news related to immigration tend to appear because of events such as elections or terrorist incidents. Different migrant groups are differently visible based on their country of origin, ethnicity, religion, or legal status. Tabloids (in contrast with broadsheets) use terms that delegitimise refugees. Immigrant groups are more represented in quality media than in other media, but are still generally underrepresented. Extant research is still insufficient.

Anti-immigrant parties may benefit from the salience of immigration-related issues, in particular in commercial broadcasting. However, most studies in this topic do not allow for a strict causal attribution of media on attitudes or voting choices.

Economic, cultural, and security framings, involving threatening aspects (e.g. labour market competition or the undermining of cultural values), can lead to negative attitudes related to migrants and immigration. However, the durability of the identified effects is questionable.

Since people are more engaged by negative information, it is expected that journalists may choose a negative frame to attract more readers. Research does demonstrate such a trend in news coverage, and coverage of immigration seems to be strongly negative. This has been shown to increase people’s perception of the issue of immigration as more problematic relative to other policy issues.

Another common frame in media research about immigration is victimisation, portraying immigrants as in need of help. This may elicit emotions of compassion in readers, but is also controversial.