The Panama and Paradise Papers: The Rise of a Global Fourth Estate

This article connects recent large-scale projects by the International Consortium of Investigative Journalists (ICIJ), such as the Panama and Paradise Papers revelations, to ongoing theoretical discussions about emergent forms of journalism 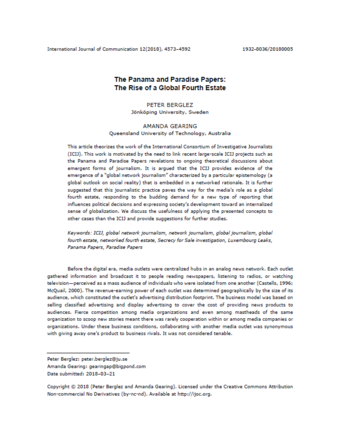 The purpose of this article is to improve the understanding of the political, professional, and scholarly implications of investigative work by theorising the emergence and role of the ICIJ. There is a gap between academic theories about emerging forms of journalism, such as collaborative journalism, and existing examples of such journalism. This article aims to connect the work of the ICIJ with relevant theories in the field of media sociology and journalism studies.

Regarding the political and democratic relevance of the work of the ICIJ, the article emphasises the need for theorising how the practice of global network journalism may pave the way for the media’s function to keep power accountable. Thus, it proposes to view ICIJ as an extension of the fourth estate into a global fourth estate, while traditional investigative journalism has been strongly connected to a fourth estate and to journalism’s critical examination of state affairs.
According to the authors, the activities of the ICIJ in recent years show that traditional journalism is becoming a more dominant actor, though still assisted by hacktivists and other activists outside the mainstream media establishment.

In the article, a potential weakness of the ICIJ is identified in its predominant traditional and often influential media houses and companies rather than a dynamic combination of professional and amateur actors. However, the paper suggests that the pressure on media companies and professional journalism to change for the better does not necessarily lead to creative synergies and hybridisation of the professional-amateur divide. As important as global network reality may be, the domestic dimension is still essential to engage domestic audiences.

From a political perspective, the ICIJ and its generation of global network journalism potentially paves the way for a globalised version of the fourth estate. The authors view the global fourth estate not as a historical break with, but as an extension of, the tasks associated with the fourth estate in professional journalism.