The SLAPP from a Sociological Perspective

This paper is authored by one of the two academics who invented the acronym Strategic Lawsuits Against Public Participation. Penelope Canan, Associate Professor of Sociology at the University of Denver studied SLAPPs together with George W. Pring, Professor of Law at the same university, adding a sociological perspective to the legal analysis 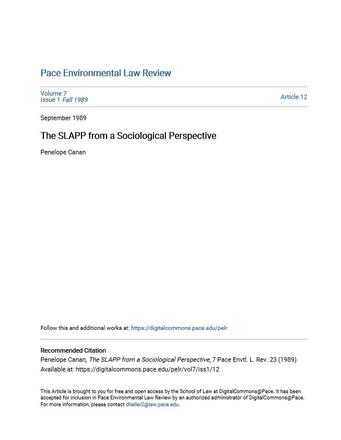 According to this approach, SLAPPs “involve the use of litigation to derail political claims, moving a public debate from the political arena to the judicial arena, where the playing field appears more advantageous”.

As this abuse of the law and of the courts comes as a reaction to public debate and participation, and its goal is to silence criticism, these lawsuits “violate Constitutional safeguard of political speech”.

“What do we know about SLAPPs using insights from economics, political science, psychology, anthropology, and my own discipline, sociology?”.

The broader view on the topic allows a wider range of knowledge and can help quantify the consequences and impact of SLAPPs. As the author explains, it gives the possibility “to learn about the heart and soul, the blood and guts, the greed and glory, the panic and the terror, the justifications and the celebrations, as well as the ramifications, of SLAPPs on people's lives”.

Another issue considered in this paper is the understanding of the relationship between law and the political vitality of American communities.