The echo chamber is overstated: the moderating effect of political interest and diverse media

The study analyzes the relationship between media diversity and political interest, challenging the impact of echo chambers and tempering fears of partisan segregation 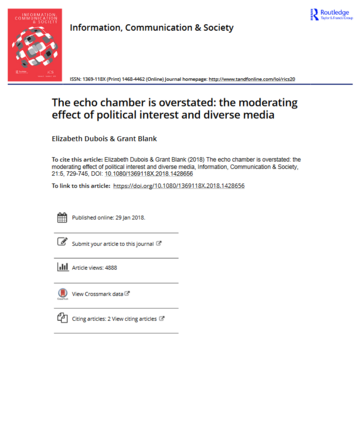 Echo chambers are a metaphor to describe when a person interacts primarily within a group of people that share the same interests or political views.
In the current media environment, where there is a wide variety of channels, there are concerns that individuals will tend to select media and content that are likely to confirm and reinforce their existing beliefs, with a negative impact on the democratic political debate.
Previous research on this topic has shown conflicting results, mainly because of the fact that many studies are focused on single platforms and do not consider the entire range of media that the individual uses to access news and political informations, and because they fail to analyze how people interact with their entire media environment.
In order to understand how people integrate media into their daily life, it is important to analyze media diets of citizens, with a focus on how they use and combine different media in a high-choice media environment to access news and political information.
Through the analysis of a nationally representative survey of 2000 adults in the UK, the study examines the relationship between media diversity and political interest and the possibility of being in an echo chamber.
In particular, this research not only is focused on whether or not someone is exposed to different perspectives, but it also considers that people could develop strategies on using different media in order to avoid echo chambers.
The results show that more media diversity and higher level of political interest reduce the likelihood to be in an echo chamber. In fact, it is stated that having a diverse media diet help individuals avoid an echo chamber, because they may be exposed to diverse information and points of view.
On the other hand, people who are both not politically interested and who do not use diverse media are more likely to be in an echo chamber, but this issue concerns only a small subset of the population. Moreover, the report adds that these people may benefit from friends and family who have a different media diet and/or are interested in politics.
The article concludes that considering the entire multi-media environment, there is little evidence of an echo chamber. Therefore, the fear of echo chamber seems to be overstated and the risk of partisan segregation is really weak.