The fake news game: actively inoculating against the risk of misinformation

Can a game in which participants create a fake news article help them spot misinformation in the real world? Researchers made an experiment in a high school in the Netherlands 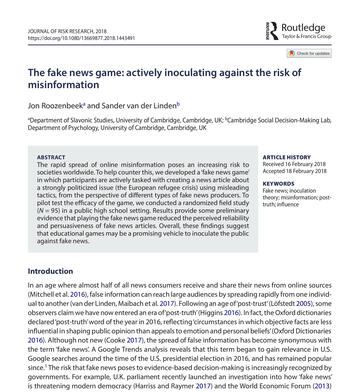 Journalism, 'Fake News' and Disinformation: A Handbook for Journalism Education and Training

A Structured Response to Misinformation: Defining and Annotating Credibility Indicators in News Articles

The authors argue that the dissemination of fake news can be modelled much like the spread of a viral contagion. As inoculation theory postulates that attitudinal resistance against persuasion and propaganda can be induced in a manner analogous to biological immunisation, they sought to test if inoculation can be used as a "vaccine" against fake news.

In collaboration with DROG, they developed “the fake news game”, a multiplayer game with the goal of actively creating a fake news article about a given topic. Groups were formed, and each one was assigned one of these four characters: the denier, the alarmist, the clickbait monger, and the conspiracy theorist. Each group was given a “source card”, explaining the background of the article that the players would need to write, and a “fact-sheet”, in which the issue at hand was explained in detail. In this case topic was immigration, and the task was to draft a report about a rise in the number of incidents in and around Dutch asylum centres. Players had to build an article with image, title, header, various paragraphs, and a conclusion. For each role they had a set of cards with four alternatives, and they had to choose the most appropriate for their character. Victory was assigned to the group with the most correct answers.

The authors tested the game in a secondary public high school in the Netherlands. After the game, they had the students read a fake news article, including several common and popular “fake news” tactics. They were then asked some questions about the article. The experiment shows that playing the fake news game does have a significant indirect effect on perceived persuasiveness through reduced reliability judgments. Early media education may therefore be the ultimate inoculation to help empower people against the risk of disinformation

An online version of the game is available.