The spread of true and false news online 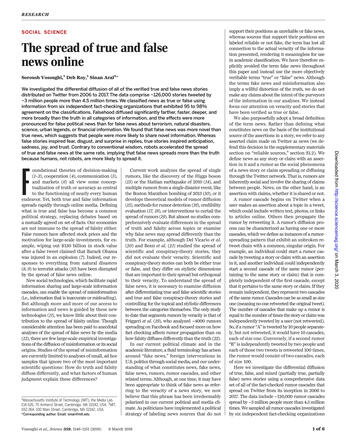 Researchers used a dataset including about 126,000 fact-checked rumour cascades spread on Twitter by 3 million people more than 4.5 million times from 2006 to 2017. A rumour cascade means independent tweets and subsequent retweets, if any. So, the same rumour can have multiple cascades. They used fact-checking organisations to classify true, false, and mixed news.

Falsehood spread significantly farther, faster, deeper, more broadly, and reached more people than the truth. Rumours were divided into six categories, with politics being the largest. False political news were more viral than any other category of false information.

User characteristics and network structure could not explain the different diffusion of truth and falsity, as users spreading false news had fewer followers and followed fewer people, were less active, and were verified less often than other users.

Bots do not seem to be an explanation, as they accelerated the spread of both true and false news, more or less in the same way. This suggests that policies aiming at containing disinformation should not focus only on bots.

One of the reason seems to be novelty, as false tweets were more novel and were perceived as such by users. When looking at emotions, based on words used in the tweets, they also found that false news also inspired greater disgust, while the truth inspired greater sadness, anticipation, and trust.