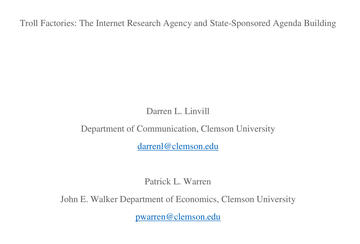 In June 2018, the United States House Intelligence Committee released a list of 3,841 Twitter usernames associated with the activity of Russia's Internet Research Agency (IRA). These were human-operated troll accounts.

The authors collected all tweets published by these accounts between 19 June 2015 and 31 December 2017, cleaned the sample, and analysed the remaining 1,875,029 tweets associated with 1,311 IRA usernames.

They identified five categories of IRA-associated Twitter accounts, each with unique patterns of behaviors:

The different types of account were used differently and their efforts were conducted systematically, with different allocation when faced with different political circumstances or shifting goals. E.g.: there was a spike of activity by right and left troll accounts before the publication of John Podesta's emails by WikiLeaks. According to the authors, this activity can be characterised as “industrialized political warfare”.