The study analyses what kind of information politicians look for in the news and how these “informational media use motives” explain their media responsiveness. Classic uses and gratifications (U&G) tradition in communication research is applied to elite studies by using a survey of Finnish MPs

Publication Date: January 2018
Research and Editorial Team: Juho Vesa; Helena Blomberg; Christian Kroll; Peter Van Aelst
Link: What Politicians Look for in the News and How That Affects Their Behavior: A Uses and Gratifications Approach to Political Agenda Setting 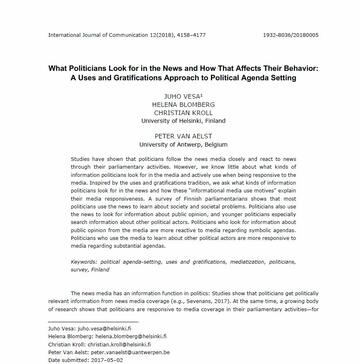 The article aims to fill research gaps about the kind of information politicians look for in the news media, their informational media use motives in regards to their institutional positions, roles, and demographic characteristics, and their responsiveness to the media. The classic U&G approach used in the research demonstrates the mechanisms of the media’s political agenda-setting power.

The survey was conducted with 200 MPs in Finland between November 2013 and January 2014. 96 MPs filled in the survey, leading to a response rate of 48%. MPs of the Social Democratic Party are overrepresented, while the National Coalition Party and Centre Party are slightly underrepresented.
The study states that politicians’ motives for media responsiveness vary: they react to media to advance their interests on particular issues, to learn about societal problems, public opinion or other political actors’ views and actions. The results of the survey show that many politicians consider the news media as an important source of many different kinds of information. Regarding all three strands of information, only 7%–22% of respondents use the media to a very small or quite small extent.

According to the findings of the study, 55 % of MPs use the media quite a lot or very much to look for information on citizens’ issue priorities, the functioning of society and societal problems, and 43% for information on other decision-makers’ behaviour and opinions. However, the public opinion motive and intra-elite communication motive are slightly less popular among MPs.

Another main finding is that, as the media has become a more central arena for elite-level political debate, the younger MPs use media to learn more about other political actors’ statements and actions communicated via the news media. The study suggests that this might be a generational effect where, because of the mediatisation of politics, younger MPs attribute more importance to mediated discussion among elite-level political actors.

The study shows that the public opinion motive predicts stronger responsiveness regarding symbolic agendas than substantial agendas. The research confirms that politicians who use the news media to look for information on the public opinion about certain topics are likely to be reactive to the news media about symbolic political agendas, such as parliamentary questions. In contrast, politicians who use the news to learn about other political actors are more responsive regarding substantial agendas, such as the handling of bills in parliamentary committees.

The findings of the research confirm that the predictive power of the informational media use motives on media responsiveness is rather limited. The study suggests that politicians are able to analyse their own informational motives for media use and that these motives in turn help explain part of their tendency to react to media coverage.