Attacks on the Press: Gender and Media Freedom Worldwide 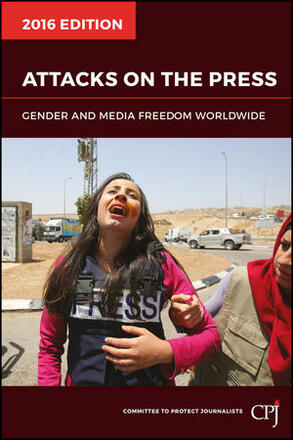 Attacks on the Press is a collection of essays by CPJ staff and outside experts that examines the challenges journalists face. The 2016 edition looks at the intersection of gender and press freedom from a variety of perspectives.

The book contains a collection of analytical reports by freelance journalists and other experts who have an inside view of global media conditions and anti-press violations related to gender, including digital harassment, discrimination, restricted access to newsmakers, imprisonment, and physical and sexual attacks. It also provides guidance for dealing with such threats and restrictions, as well as potential solutions, including safety measures and direct advocacy with the diplomatic community on behalf of threatened journalists around the world, in keeping with CPJ's mission.

The publication presents the abuses against the press documented during the last year, devoting specific attention to the current state of journalist safety around the globe and providing an examination of repression tactics based on gender and censorship tactics journalists face every day. A compendium of countries seeking to undermine the freedom of the press is also included.

Chapters of the book are available online and the volume can be purchased at Wiley website.