Attacks on the Press: The New Face of Censorship

The 2017 edition of CPJ's annual report on press conditions worldwide focuses on the new challenges and forms of censorship, which are becoming increasingly serious for journalists and media

Publication Date: May 2017
Publisher: Committee to Protect Journalists (CPJ)
Link: Attacks on the Press: The New Face of Censorship 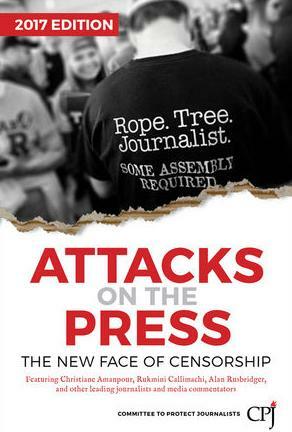 Every year the Committee to Protect Journalists publishes a report on the press conditions worldwide, focusing on the dangers and threats faced by journalists and media. In particular, this year's report stresses the new challenges and forms of censorship, which are becoming serious problems in many different countries.

Censorship is sometimes perpetrated through familiar means, namely financial and legislative pressures, physical harassment and imprisonment, or even murder of journalists. Yet the evidence indicates that these means are often employed in novel ways or at unprecedented levels. In other cases, governments and non-state actors are developing “innovative ways to suppress the media”. As an example, in the case of online media censors increasingly recur to website blocking or online trolling.

Most of the report chapters focus on individual, significant country cases, covering many of the world's regions. With reference to the situation in Europe, one of the main problems is caused by the restrictive laws adopted in the wake of recent terrorist attacks. Authorities intimidate journalists in the name of national security, provide surveillance agencies with increasing power and discretionality, and seek to evade transparency requirements. As for Turkey, collusion between the dominant media and the government contributes to the dire state of democracy in the country.

Besides discussing the new forms and instruments of pressure exerted against the media, the CPJ's report provides journalists guidance on how to deal with those challenges and threats, in order to ensure their own and others' safety, as well as on how to use the existing laws and institutions to counter censorship attempts. Moreover, by pointing out the challenges faced by journalists worldwide, the report aims at highlighting the problems they face and at advocating for change.

Individual chapters of the report are available online , while the whole book can be purchased on the Wiley website .