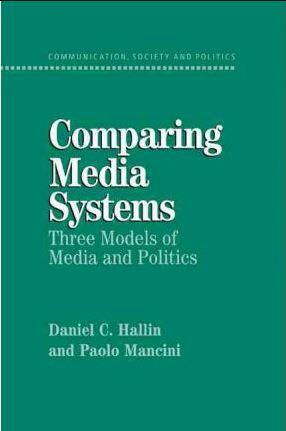 This publication aims to propose a comparative study of media systems, geographically focusing on Europe and North America. It starts with a critique of the milestone Four Theories of the Press (Siebert and oth., 1963): even if the authors agree on the existence of a strong relationship between media and socio-political systems, media are not only a “dependent variable” but rather have an impact on social structures as well. According to the authors, the dependence of politics on mass media is increasing.

The book then traces three models of media systems: the liberal one (UK, Ireland and North America), dominated by the market’s logic and commercial media; the demo-corporative one (continental Europe), where the state is active in the media sector but is legally limited, and where we can find a mixture of commercial media and media linked to socio-political organizations; finally, there is the plural and polarized model (southern Europe), characterized by major overlapping between politics and mass media, massive state intervention and relative underdevelopment of commercial media.

The book analyses journalism models in an empirical way, trying to suggest relevant indicators for a comparative research of media systems. According to Hallin and Mancini, such criteria are: (i) the market’s development; (ii) the nature and degree of links with political views existing in the given society; (iii) the development of the journalistic profession; and (iv) the degree and nature of state intervention in the communication system.