Freedom of Expression, the Media and Journalists: Case-law of the European Court of Human Rights 2016 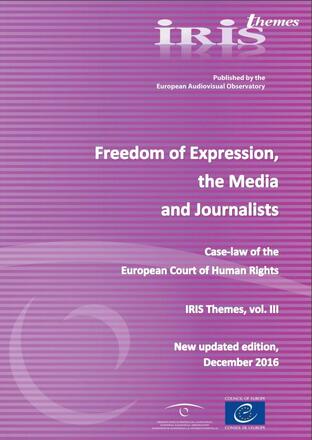 Using a systematic approach, the book guides the reader through the European Court of Human Rights case-law on freedom of expression and media freedom, offering a valuable and quick reference tool for orientating researchers and practitioners in the understanding of the steadily growing ECHR jurisprudence on Article 10.

The book contains the summaries of over 250 judgements and decisions adopted by the Court between 1994 and 2016. Each case is categorized through the use of key-words and it includes the link to the direct source contained in HUDOC, the Court’s online case-law database. The table at the beginning of the volume provides a synthetic overview of the cases included, keywords and outcomes for each case.

The last analyses of the Court’s case law regarding audiovisual media, media pluralism and freedom of expression in the online environment confirm the importance of the application of Article 10 of the European Convention as part of the economic, technical and regulatory developments in the European media landscape. In addition to the 2015 version of IRIS themes, there are 16 newly-introduced case law references. They mostly concern defamation, privacy, freedom of expression in the cyberspace and political expression.