Freedom of expression and media in transition: studies and reflections in the digital age

Globalization and digitalization challenge our shared understanding of freedom of expression. This volume reflects on the role of media in a time of uncertainty 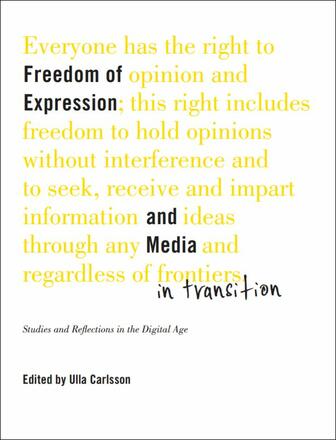 "A wise government will rather let the people express their discontent with pens than with other guns, which enlightens on the one hand, appeases and prevents uprising and disorder on the other."

These words by Peter Forsskål, written a few years before the adoption of the first Freedom of the Press Act in the world - in Sweden in 1766 - open this book devoted to the crucial relation between freedom of expression and democracy in the digital age.

The year 2016 marked the 250th anniversary of the Swedish Press Freedom Act. In the same year, official celebrations for the World Press Freedom Day where hosted in Helsinki. To mark the occasion, Nordicom edited this volume exploring the challenges to freedom of expression in the digital age. An age in which, as reported in the opening essay of this volume, “almost everyone is prepared to declare their support for human rights and freedom of expression – as long as there is no cost in the form of discomfort, power or money.”

The media have long been considered central, shared sources of information, ‘watchdogs’ and the fora of public debate – in short, to constitute a public sphere – based on the nexus between media, democracy and civic engagement (Askenius and Østergaard 2014). Moving from the strong interconnection between development of societies, freedom of expression and freedom of information, the essays presented in the book explore the current challenges for freedom of expression at the normative, ethical, societal and economic levels.

Every day we see threats to freedom of expression – and freedom of the press: new forms of state censorship and repression, self-censorship, surveillance, monitoring and control, hate speech, gatekeeping, propaganda-disinformation, acts of terror, anti-terror laws and organized crime. And freedom of information is a critical issue in many countries, but especially in zones facing

The four sections of the book explore respectively: the Nordic media model - long regarded as a best practice but not immune to weaknesses and distortions; issues related to a transitioning media space, more and more characterized as digital; threats to freedom of the press originating from control, surveillance and censorship and finally, the challenges of reporting war and conflict.