Media and Politics in New Democracies 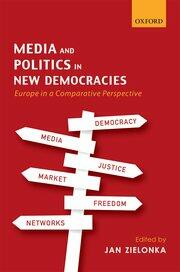 Published by Oxford University Press, this book analyses the relationship between the media and politics in new democracies in Central Eastern Europe and other parts of the world. It does so from both theoretical and empirical angles.

How is power being mediated in new democracies? Can media function independently in the unstable and polarised political environment experienced after the fall of autocracy? Do major shifts in economic and ownership structures help or hinder the quality of the media? How much can new media laws alter old journalistic habits and political cultures? And how do new technologies impact the media and democracy? The book examines these questions, drawing on a vast set of data assembled by a large international project.

Media and Politics in New Democracies focuses chiefly on new democracies in Central and Eastern Europe, but chapters analysing new democracies in Latin America, Africa, and Southeast Asia are also included. These new democracies represent a variety of what sociologists call 'glocalism': homogenisation and heterogenisation coexist, revealing hybrid models and multiple modernities. It is local culture that assigns meaning to global and regional influences. 'Ideal' liberal models and best practices are being promoted and aspired to, but these models and practices are often being adopted in opaque ways generating results opposite to those intended.

The book finds many new democracies to be fragile if not deficient, and tries to show what is really going on in these countries, how they compare to each other, and what they can learn from each other.