Media in New Turkey. The Origins of an Authoritarian Neoliberal State 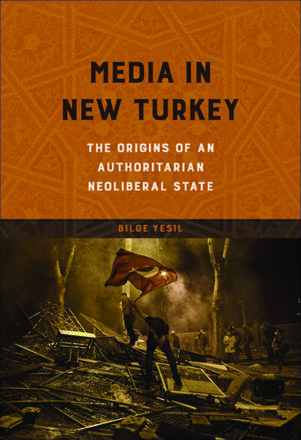 Investment and expansion have made Turkish media a transnational powerhouse in the Middle East and Central Asia. Yet tensions continue to grow between media outlets and the Islamist AKP party that has governed the country for over a decade.

In Media in New Turkey, Bilge Yesil unlocks the complexities surrounding and penetrating today's Turkish media. Yesil focuses on a convergence of global and domestic forces that range from the 1980 military coup to globalization's inroads and the recent resurgence of political Islam. Her analysis foregrounds how these and other forces become intertwined, and she uses Turkey's media to unpack the ever-more-complex relationships.

Yesil confronts essential questions regarding: the role of the state and military in building the structures that shaped Turkey's media system; media adaptations to ever-shifting contours of political and economic power; how the far-flung economic interests of media conglomerates leave them vulnerable to state pressure; and the ways Turkey's politicized judiciary criminalizes certain speech.

Bilge Yesil is an associate professor of media culture at City University of New York, College of Staten Island. She is the author of “Video Surveillance: Power and Privacy in Everyday Life”.