The book takes into consideration the structural and cultural changes in Russian media landscape, focusing on the impact that Russian media have on citizens’ identities 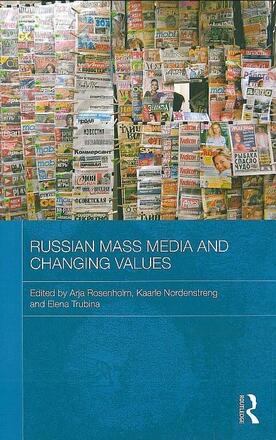 Adopting the viewpoint of cultural studies, this volume- published by Routledge- focuses on the structural and cultural changes in the Russian media industry during post-socialist transformation and the political and economic spheres of the Russian media landscape.

This publication raises questions and topics exemplifying the ambiguity of the current Russian media landscape: according to the authors, the post-socialist transformations and the global media market confront the public with a new kind of pluralism combined with a fragmentation of knowledge, norms and values.

The second and third part of the volume suggest that within the media and popular culture and inseparable from social and cultural processes, changes in the media industry and in the political and economic spheres have a decisive impact on how citizens’ identities were re-formulated.

The authors of this book believe that the study of ‘glamour’ and lifestyle magazines should not be underestimated and invite the reader to “consider various cultural products of entertainment and how they construct new identities and ‘imagined communities’, lifestyles etc.”

Moreover, it is pointed out that Russian media are far from being homogeneous, and that the mass media are – not unlike the ‘Western’ media – a powerful, albeit not primary, social agent appealing to readers of different social strata in developing different social, political and cultural interests.

The book is structured in three parts that highlight the contemporary Russian media from different angles:

This section presents a map of the media industries and their consumption in contemporary Russia, with a separate look at the changing characters of the journalistic profession. Ownership of media industry is divided between governmentally controlled state capital and privately controlled commercial capital, the latter comprising both domestic and foreign ownership. The trend in the 2000s has been a decrease in commercial capital and a relative increase of state capital.

This section of the book also offers basic data on the use and consumption of different media, showing, among other things, that television continues to be the most important medium among Russian people at large. Finally, we can find a summary of case studies on how journalists view their profession amid changing media structures and political conditions.

Biopolitics of the media

Of special interest for this section of the book is the question of how Russian media readership of newspapers, special magazines and popular literature are expected to construct their understandings of welfare policies, of crises such as the ‘health crisis’ and the ‘demographic crisis’ announced by the Russian government. This section also explores the topics of gender and lifestyle.

Media as the arbiters of style

This last section of the volume focuses on the symbolic production of popular values and meanings by various media. This study is done, among other things, analysing specific publications or shows, such as the  Russian version of Survivor (entitled The Last Hero). According to the author, the show gradually stripped down most of the ethical connotations the notion of hero might have held for the Russian audience.

To conclude, the book looks at the dynamics between global trends and national media. In this regard, the authors emphasised three points: first, the thorny problem of the interconnection between media and democracy; second, the role of the nation-state; and, finally, the specifics of the intertwining of post- socialist structures and global changes in the media sector.