Julia Cagé explains the economics and history of the media crisis in Europe and America, and she formulates a solution based on a new business model: non-profit media organization 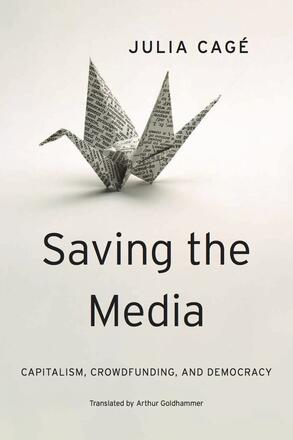 Taking the move from the crisis of media, Julia Cagé first takes into consideration the different processes which led to the current situation: decrease in advertising revenues brought media to reduce their employees, to join big conglomerates and to embrace the logic of tabloidization. The result: “news organizations present citizens with less and less in-depth reporting and a narrowing range of viewpoints. If democracy requires an informed citizenry, this trend spells trouble”.

Cagè then moves to the part construens of her work, to suggest that the answer may be found is a new business model: a non-profit media organization, midway between a foundation and a joint stock company. This model would enable the media to gain independence from shareholders such as advertisers and government. More influence would be instead given to readers, employees, and innovative methods of financing, including crowd-funding. Cagé’s prototype meets the challenges of the digital revolution and the realities of the twenty-first century, inspired by a central idea: that news, like education, is a public good.

Saving the Media stimulates a much needed debate on a key component for democratic societies.

The book is available in several languages: