“Stakeholder-driven journalism” is the real future of watchdog reporting, a new book argues 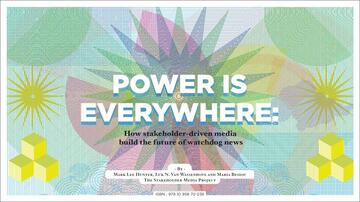 Here’s an uncomfortable truth for many: the rise of Breitbart, the alt-right news site that helped propel Donald Trump into the White House, can teach journalists a lot about how to build audiences, affect political change, and build news businesses.

That’s one of the ideas in Power is Everywhere: How Stakeholder-Driven Media Build the Future of Watchdog News, a new 162-page book that examines how the rise of stakeholder-based media organizations are taking a larger role in setting the news agenda and presenting viable new ways to attract readers and sustain news businesses.

The report defines stakeholder-driven media as “media created and controlled by communities of practice and interest” and stakeholders as “people who affect or are affected by issues and organizations.” That’s a broad definition that lets it lump together ProPublica and Breitbart, the Center for Public Integrity and 30A  — something that brings partisan media, mission-driven media, and simply reader-centric into what some might would consider a natural grouping.

Unlike the typical mainstream media organization, which positions itself as an impartial messenger of the news that it thinks matters to readers, stakeholder-based organizations are heavily invested in the goal of empowering readers to affect the topics they care about. (Again, that’s a framing that probably misses a lot of crusading journalism in mainstream outlets and combines traditional comfort-the-afflicted-afflict-the-comfortable journalism values with explicitly partisan work.) The fundamental difference, as the authors see it, is that stakeholder-based groups unabashedly see themselves as partisan members of or advocates for the groups that they represent. It’s in many ways a return to the pre-1920’s era of media, for better or for worse.

(Rasmus Kleis Nielsen hit on some of the same issues in his 2017 prediction here at Nieman Lab , in which he argues that journalism driven by business interests, social movements, governments, and political parties will make up a greater share of the news in an era where the role of advertising as a revenue driver is in decline.)

“For sites like Breitbart, the question isn’t ‘Which stories matter?’ but ‘What are you going to do about it?'” said Dr. Mark Lee Hunter , the book’s head author and a researcher at the INSEAD Social Innovation Center  in Fontainebleau, France. “They’re talking to people who have real skin in the game and who need information that can help to guide their actions and decisions.”

While Breitbart is the most newsworthy of organizations that fit the stakeholder mold, the book also cites a number of other examples, such as Greenpeace, ProPublica , Kyiv Post  in Ukraine, and Mediapart  in France, all of which have used the stakeholder-based approach to great effect with their audiences.

Hunter said that the book, which he cowrote with researchers Luk N. Van Wassenhoven and Maria Besiou, is aimed at professors and students at journalism schools, as well as investigative journalists. All these groups, the authors say, should understand both how stakeholder-based news organizations are driving the news agenda, and how journalists can use the concept to build audiences around their own work.

The goal, too, Hunter said, is to help more journalists think of their work in business terms. One of the book’s chapters breaks down the business model of investigative journalism into core components such as “value proposition,” “customer segments,” and “cost structure.” The idea, Hunter said, is to help investigative news organizations think more creatively about their businesses and wean themselves off foundation money, which many assume is the only way to pay for watchdog reporting.

Ultimately, the book was written with the assumption that stakeholder-based news organizations will be forced to take a larger role in the production of public good-focused investigative journalism, as more cash-strapped mainstream news organizations scale back their investment in it.

“The problem with the current model for investigative reporting is that it depends on mainstream media for distribution. What that really means is that we’re putting ourselves on a burning platform,” Hunter said.