Understanding Media and Information Literacy (MIL) in the Digital Age. A Question of Democracy

A comprehensive overview of studies and approaches about Media and Information Literacy, so that the topic can be understood as part of a whole including legislation and reforms in media, education, and society. This book considers MIL a long-term goal, not a short-term solution 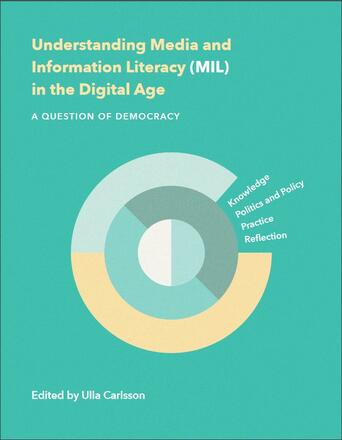 How Young People Consume News and The Implications For Mainstream Media

“The book consists of three parts. In the first part, a number of articles of a more general nature discuss media and information literacy (MIL) as well as courses of development on national, regional and global levels. The focus in the second part is on Sweden, the host the UNESCO Global MIL Week Feature Conference in 2019. The articles in this part present current research findings, policy decisions and political initiatives and some examples of ‘best practices’ in various areas. The third part presents a new approach to MIL in a context of social change and Agenda 2030”.

As editor Ulla Carlsson states in her opening essay, titled MIL in the Cause of Social Justice and Democratic Rule, “any inclusive democratic society is based on well-informed, involved, reflecting, critical and otherwise well-equipped citizens” and “artificial intelligence, robotization and even blockchain technology pose new challenges to societies already caught up in ongoing processes of political, social and economic change, with a risk of widening knowledge gaps”.

In the first part, two more essays by Ulla Carlsson deal with fields of knowledge and organisation strategies at the national level; Guy Berger writes “thoughts for the road ahead” and Divina Frau-Meigs suggests “a curriculum for MIL teaching and learning”.

The second part is the longest one (around 150 pages) and deals with the case of Sweden, analysing the current research, the field of politics and policy, and giving an overview of best practices.

Part III suggests a new approach giving a global perspective. Alton Grizzle and Masatoshi Hamad write about “Media and Information Literacy Expansion (MILX)”: “We are proposing an innovative social change theory, called MIL Expansion (MILX) and Media-Information-Communication (MIC) Next Standard. MILX investigates how MIL can be magnified, integrated with other social competencies, and better sustained through interventions at the community, group, and institutional levels to reach more people. MIC is the study of new approaches and the articulation of new policy frameworks, and theories of change about media, information, and communication (MIC) for the next generation".