A study by UNESCO, presenting ways to tackle online hate speech through strategies put in practice by different actors. 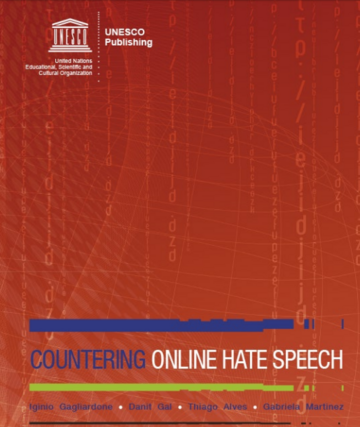 The first four chapters of the book provide an overview on the ongoing hate speech debate, presenting the international principles that can help to define this complex concept. They offer an overview of international, regional and national normative frameworks developed to address hate speech online, pointing out that although these legal measures are important instruments to regulate hate speech, they could involve risks and limitations. As a consequence the report places particular emphasis on civil society and social steps, rather than state-initiated legal measures. The fifth chapter presents a wide number of initiatives that have been implemented to address the issue on a societal level.

On a definition level the study stresses the fact that even if multilateral treaties and initiatives (such as the International Covenant on Civil and Political Rights and the Rabat Plan of Action) have helped making clarity on the term hate speech, the expression is still used in everyday discourse in a widely confused and generic sense. Facebook, Twitter, and Google have advanced their own definitions of hate speech, while national and regional bodies have tried to agree on definitions rooted in local traditions. The difficulty in finding a universally shared definition of hate speech and the common goal of avoiding violence and protecting human dignity have brought different stakeholders to seek locally relevant solutions.

The study points out the difficulties for governments to enforce national jurisdiction in the virtual world. Public pressure has induced online private spaces of expression like Facebook and Twitter to become more responsive towards tackling the problem of hate speech online. However these digital companies are not yet fully involved in global debates about how to identify and respond to the issue.

The relation between online and offline hate speech is still to be fully understood. The study stresses that solving the problem on a legal ground would not tackle its root causes. Hate speech is often the expression of deep tensions and inequalities within society, therefore a proper comprehension of the problem is fundamental. This study offers various examples of research aimed at mapping the emergence and diffusion of hate speech online, but also highlights the lack of studies examining the links between hate speech online and other social phenomena, ranging from access to education to rising inequalities.

The report places particular emphasis on civil society and social intervention. It presents a wide number of initiatives that have been implemented to address the issue taking into account different contexts where hate speech emerges. The report also examines how private companies seek to address instances of hate speech online by favouring user flagging, reporting, and counter-speaking, and how the architectures characterizing different social networking platforms may influence both the diffusion of and the responses to hate speech online. As a result, the various initiatives (monitoring, analysing, educating to media and internet literacy) implemented by dedicated and specialised organizations to counter online hate speech emerge as extremely important and complementary to each other.